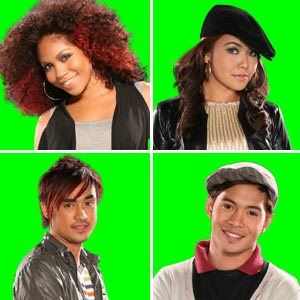 For the first elimination round of GMA-7's Pinoy Idol, four contestants were already booted out of the competition. The names that made the dreaded list are Drizzle Muniz, Dio Paolo, Elliot Andal and, unexpectedly, Bev Ejercito who got the lowest votes from the viewers.

This is part of the workshop stage of the local version of the Idol franchise, which has already opened voting lines for the viewers. Raymond Gutierrez did not prolong the agony of the contestants. He nonchalantly announced that Dio was the first guy to be out from the 12 males. Unlike in American Idol, he did not even review the judges' comments regarding the performance of the Idol aspirants. This shocked not only the viewers but the contestants as well.

Drizzle was the second contestant to be eliminated followed by Elliot. When Bev was about to flash her trademark smile, she received the same "sorry..." from the host since she was also eliminated from the show. This was again another shock because Bev was considered by many viewers as one of the strongest contenders for the title of Pinoy Idol.

These four aspirants could only give a heart-wrenching farewell when they waved goodbye to the crowd and the viewers of Pinoy Idol.

These 20 singers will continue their Pinoy Idol journey as they face another battle on May 30, Friday, and May 31, Saturday. The next elimination will be on June 1, Sunday.