Does Jasmine Curtis Smith consider herself a brat? 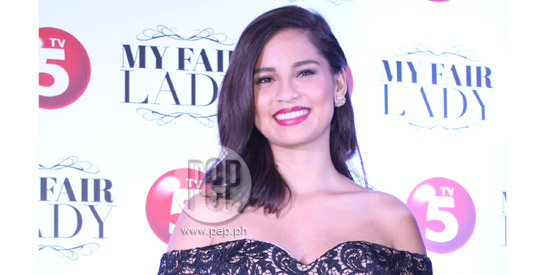 Jasmine Curtis Smith stars in TV5's adaptation of the Koreanovela, My Fair Lady.

Jasmine Curtis Smith says acting like a brat is fun.

In TV5's Filipino adaptation of hit Koreanovela, My Fair Lady, its Primetime Princess is cast as Audrey Tiuseco, the richest “it” girl in the country and heiress of Tiuseco Land.

Coming from a prominent family, Audrey grew up to be a major problem child in the family.

When asked what she likes about portraying the lead character, Jasmine replied, “I think playing the role of Audrey Tiuseco has been fun more than challenging because brat siya, e.

Then, she admitted, “Ako, self-aware ako kapag ganun ako in person and in real life.

“So, I know how to use how I am in real life and put it into character.

Althought there are times when she loses her temper, Jasmine clarified that she never became a unreasonable brat.

Unlike her character Audrey, the young actress said she never took her family for granted.

“Ako, I look at the finer details of life, and I see how better I am compared to others.

“So, I really take time to appreciate that compared to my character.”

The Philippine adaptation of My Fair Lady will begin starting Monday, September 14, at 9:30 pm on TV5.