PBB Teen Edition Plus to hold Big Night on June 7 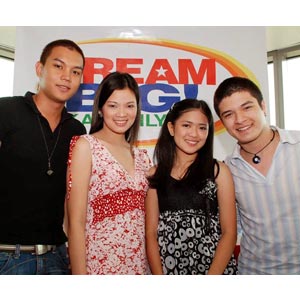 The Big Night of Pinoy Big Brother Teen Edition Plus is scheduled to take place on June 7 (Saturday). The teen housemates who have been evicted from this edition are (from left) Jolas, Priscilla, Rona, and Josef.

In accordance with the schedule of Pinoy Big Brother Teen Edition Plus, there will be an eviction night scheduled this Wednesday, May 28, wherein one of the three nominees will be leaving the PBB house for good. Robi, Valerie, and Nicole are the three teen housemates who are all fighting for the chance to be included in the Big Night, which is expected to take place on June 7.

During the nomination night held last Sunday, May 25, Nikki and Val both got 5 points from their fellow housemates. The True-Blue Atenista Robi received 4 points. A day later, Robi talked with Big Brother since the 18-year old boy wanted to end his stay in the PBB house. After thinking over what Kuya told him, Robi decided to stay for the sake of his family and friends.

EVICTEES. Meanwhile, ABS-CBN conducted a press conference to formally introduce the PBBTEP evictees to the members of the press. The Deaf Dreamer of Davao Priscilla and The Prisoner's Daughter of Dumaguete Rona performed a duet yesterday, May 26, at the 9501 restaurant of ABS-CBN. The Gentle Giant of Bulacan Jolas then performed an energetic dance number with The Lethal La Sallite of Mandaluyong Josef.

Of the four evictees, Rona was the last teen housemate to get out of the PBB house. Rona received her moniker because her father is serving time in jail for a drug-related case. She wanted to take up medical technology in the University of Santo Tomas but she was not able to take the entrance examinations since she was in PBB.

While inside the PBB house, Josef developed a close bond with Nicole (also known as Nikki) despite the fact that both of them were in a relationship at that time. During the press con, Josef declared that he has talked with his girlfriend and they have both decided to end their relationship. Now that he is single again, Josef would like to court Nikki when she gets out of PBB.

Basketball player Jolas has yet to decide whether to study Management in the Far Eastern University or Sports Science in the University of the Philippines. In the same way, Priscilla is undecided whether to continue her education here in Manila or go back to Davao.

The other eviction nights will take place on May 31 (Saturday) and June 4 (Wednesday), during which ABS-CBN will reveal the Big Four who will compete against each other for the Big Night of Pinoy Big Brother Teen Edition Plus.