Jeremy Shada (aka Finn of Adventure Time) says it's "awesome" to be in Manila; gears up for Dreamworks network show 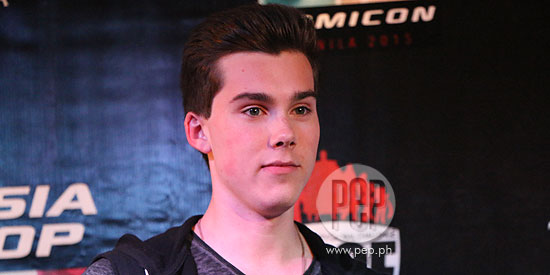 Jeremy Shada and his band Make Out Monday received a warm welcome from Filipino fans. “It’s awesome, it’s kinda crazy, surreal thing," says Jeremy who is best known as the voice of Finn in Adventure Time.

Jeremy Shada aka Finn of Adventure Time is currently in the Philippines together with his band, Make Out Monday.

The actor is one of the Hollywood stars who will join the 2015 Asia Pop Comic Con happening this September 17-20 at the World Trade Center, Pasay City.

This weekend, Filipinos will be able to personally see Paul Bettany (aka Vision of Age of Ultron); Nathalie Emmanuel (aka Missandei Game of Thrones); Chad Michael Murray (of One Tree Hill and Agent Carter fame); Colton Haynes (of MTV's Teen Wolf); and pro wrestler Bill Goldberg.

PEP.ph (Philippine Entertainment Portal) had the chance to talk to Jeremy and ask him about his Manila visit, his career, and future projects.

He was surprised that he and his band got a warm reception from Filipino fans when they arrived in the country.

“I am very thankful, I feel very blessed.

“It’s nice being able to put something together that me and my band love doing and sharing it with people who love it.”

He summed up his feelings being in the Philippines by saying, “I am loving it! It’s an awesome thing.”

Since his character is already maturing, what are their future plans for Finn?

“Hopefully, I am hoping that Finn finally meets a girlfriend. That would be awesome.

“I think the cool thing about the show is that Finn actually is aging throughout the show.

“So you really get to see him through his teenage years, adulthood, kinda all of that.

“All those different emotions and those things that other people go through with their lives, they kinda find that relatable.

“So for me, that’s the most exciting part, you can see a lot more backstory of Finn and his future with his family and everything, so a lot of the hug-deep emotional stuff.”

When asked if doing Adventure Time has limited him to doing wholesome roles, Jeremy exclaimed: “No, not at all!”

He added, “The good thing about doing Adventure Time and doing the other show I am doing as far as the actual time I use, I only go to recording once a week, for Adventure Time it’s like 3 hours, we kinda record all year round but it's only once a week.

“It allows me to actually pursue other interests like my band Make Out Monday and other on-cam stuff as well.

“For me, I stay pretty busy, constantly I am doing something, I do auditions or recording with the band or travelling like this, travelling for the Asia Pop Comic Con, it’s really not a crazy job for it allows me to pursue a lot of things.”

Three years ago, Jeremy’s brother, Zack Shada, was tapped to be the original voice of Finn in the pilot episode of Adventure Time when it was still under Nickelodeon.

Was there any competition between the two brothers?

Jeremy quickly answered, “No, no, no!

“Zack actually did the original voice for Finn of Penn that’s what he was called in the pilot when it was still a Nickelodeon short.

“And then Cartoon Network picked it up few years later and they just kinda assumed that his voice has changed or whatever.

“When I auditioned my voice was really small. It’s far from the voice that originally did it. I auditioned couple of times, I got the job and nobody knows that it was my young brother who first did it.

“I just got super lucky, it was a crazy coincidence.

“From then, people ask that and I can say that no, not at all.

“I think you’d be much happier with me doing it, than someone else in the family, we kinda kept it like a dynasty.

“I’ve been doing it ever since and obviously I get along well with him, we’re in the band together so there’s no hard feelings at all.”

Apart from being busy with Adventure Time and his band Make Out Monday, what are his upcoming projects?

“I would love to talk about my upcoming Dreamworks network show but unfortunately it has not been announced yet and they’re really locking that stuff.

“I am really not supposed to be talking about it.

“All I can say is that it’s gonna be an awesome show, it has great cast, great chemistry, it’s very epic.”