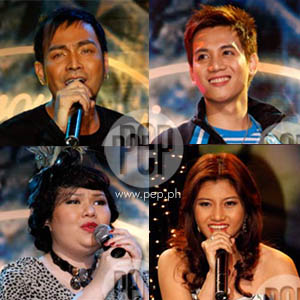 The workshop phase of the reality singing competition Pinoy Idol continues, as the Top 10 males and Top 10 females battled it out on stage with their soulful performances. The past Idol week has been an interesting one for the remaining 20 contestants, who each had to perform a song popularized during his or her birth year.


The performance nights, held on Friday for the females and Saturday for the males, were a delightful mix of ballad, rock, and upbeat melodies as the Idols gave their own renditions of popular songs, such as "Always Something There To Remind Me," "Boys Don't Cry", "More Than Words," "Open Arms" and "Wind Beneath My Wings."


During the elimination night held last Sunday, four Pinoy Idol contestants were booted out of the competition. Rye Estrada, Sherwin Marquez, Regene Ong, and Vren Villaflor bade their supporters a warm farewell after host Raymond Gutierrez announced the results. But for judges Ogie Alcasid and Jolina Magdangal, one eliminated contestant deserved to stay.


The eliminated contestants were part of the Bottom Group—the singers who got the lowest number of votes from viewers nationwide.

Watch these talented singers showcase their chosen songs on June 6 and 7 for the performance nights, and on June 8 for the results night as the search for the first Pinoy Idol continues on GMA-7.