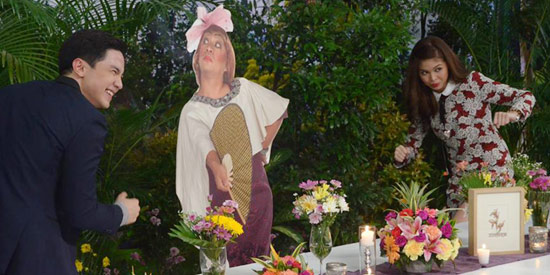 Last September 19, the date of Alden Richards and Yaya Dub (played by Maine Mendoza) finally took place. On that day, Eat Bulaga reached a TV rating of 43.1%, which is now the highest TV rating for any show this 2015.

Lola Nidora (Wally Bayola) previously gave her permission to Alden and Yaya Dub to go on their first date. However, she gave a condition to Alden: no touching and Yaya Dub must return before Eat Bulaga ends.

Before the first date, it was seen that Alden paid respect to Maine’s father who was at the studio at that time.

From the location of Eat Bulaga’s segment “Juan For All, All For Juan”, Yaya Dub went all the way to the Broadway studio for their first date.

Before they were allowed to see each other, Lola Nidora prepared a “Getting to Know Each Other” game wherein their answers for the ten questions should match for seven times. For every correct answer, they will move on to another station until they reach their dating destination.

Luckily, they got seven correct answers and AlDub finally went on their first date. However, they were both seated on a long table and Lola Nidora’s standee was placed between them.

As they ate isaw, the two were able to exchange smiles and Dubsmash acts. However, after a few minutes, Yaya Dub’s alarm rang, indicating that it’s time for her to give medicine to Lola Nidora.

Lola Nidora allowed Yaya Dub to push through with her date but unfortunately, she did not hear her instructions so she left the venue onboard a car.

Alden was left alone at the long table and a car crash could be heard in the background, ending this installment of Kalye-Serye.

MEGA MANILA RATINGS. How did the September 19 episode of Eat Bulaga fare in Mega Manila based on data from TV ratings data supplier AGB Nielsen?

The Kalye-Serye featuring #ALDUBMostAwaitedDate was able to get an overwhelming TV rating of 43.1%. This figure is now the highest TV rating for any show this 2015.

The previous record was also held by Eat Bulaga, when it rated 39.5% last September 5.

Meanwhile, ABS-CBN's It‘s Showtime got a TV rating of 10.7%, based on overnight ratings among Mega Manila households.

In the National Urban Philippines (NUTAM) ratings of AGB Nielsen, Eat Bulaga got 40% while It's Showtime only managed to get 13%.

The 36-year-old noontime variety show registered a TV rating of 29.6%.

This figure is 11.7 points higher than its direct competitor.

Meanwhile, ABS-CBN's It's Showtimegot a TV rating of 17.9% nationwide.