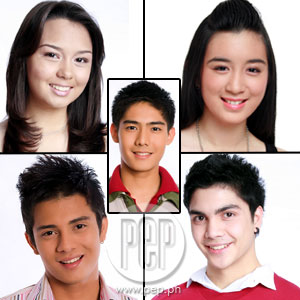 For the first time in the history of Pinoy Big Brother, Kuya's residents were made to face their former housemates in a heart-pounding episode aired last Monday, June 2. The jury, composed of guardians and ex-housemates, included the houseplayers who stayed for a while inside Big Brother's house.

The former tenants of PBB Teen Edition Plus all wore black hooded robes and were seated in a semi-circle surrounding the chair provided for the housemate to be questioned. The room was quite dark and the reddish light cast an eerie glow on the whole proceedings.

One by one, the remaining housemates-composed of Alex, Robi, Beauty, Ejay, and Nicole-were subjected to the questions thrown by the Grand Council to rattle them and let them show their true colors.

First to sit on the hot seat was Alex, who was grilled regarding his closeness to Beauty even though he is committed to his girlfriend. He tells the Grand Council, "It's not right...I didn't feel anything but now merong something but not too much."

"I felt something for Beauty every day that we spent inside the house together," admits Alex, the Italian Valentino of Milan.

The hardest line of questioning was reserved for Beauty, the Rebellious Beauty of Dumaguete. Rona's mom immediately asked Beauty why she nominated her daughter for eviction. "Hindi ko siya ma-gets kasi we've opposites," explains Beauty. But it turned out that the housemate wanted Rona to leave the PBB house so Beauty could be the sole representative of Dumaguete in the reality show.

Rona then asked Beauty, "Do you think you can inspire the youth today with your actions?" She answered by saying, "I asked myself, ‘why did I join?' I feel I'm not someone who should be looked up to."

Daddy John (the father of Kevin) stood up and called Beauty OA (overacting) but he added, "I admire that...I watch the show because of you." Because of his compliment, Beauty could not help but break down and apologize for the hurtful things that she said and did inside the PBB house.

The Promdi Hottie from Mindoro Ejay was criticized for his difficulty in conversing using the English language. In fact, Tita Anna (the guardian of Josef) was tasked to interpret whenever members of the Grand Council used English to talk with Ejay. Daddy John asked Ejay: "Do you intend to be a big star, without knowing English?"

The irate guardian also put Ejay on the spot by asking him "Do you think it's possible to win 1M without doing anything? Is this Teen Edition Plus for the Poor?" He based this on Ejay's reasons for nominating Robi, which focused on the housemate's financial status. But the Mindoro native simply stated that he believes Robi's dreams will come true even if he did not win PBB Teen Edition Plus.

Josef then made Nikki choose between him and Alex. Nikki could not answer immediately but finally said, with a giggle, "Ikaw."

As for Nikki, she pointed out that the interrogation was a way of showing the public how tough they are. "Gusto nila i-test tayo para makita ng taong bayan kung hanggang saan ang kakayanan natin."