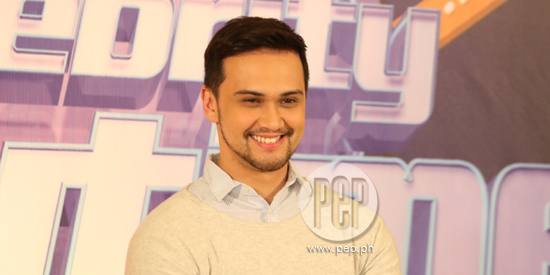 The talk-comedy-game show, which will premiere this Saturday, September 26, features celebrities who will be pitted against each other in amusing, house party games.

During the press conference of the new game show on September 23, Billy said he is happy to be given another hosting job aside from his two shows, Your Face Sounds Familiar and It’s Showtime.

He also pointed out that even thought these three programs are all comedy-variety shows, there are major differences among them.

“Dito naman po, I get to experience the 'at home,' parang nakikipaglaro lang ako sa bahay ko. So this is more relaxed, pero enjoy pa din.”

ORIGINAL CONCEPT. According to Billy, the new game show is not a franchise and an original creation of ABS-CBN.

He related that it was during the first season of Your Face Sounds Familiar when they thought of the idea.

“When we brainstormed for this program, it was the peak of Your Face Sounds Familiar season one and then we realized, ‘Ay, ang ganda ng bonding ng grupong ito.’

He also explained the mechanics of the game.

Since celebrities are the main participants of the show, Billy was asked to name those whom he wants to see on the game show.

For the first round of games, there are two "celebri-teams" who will compete against each other.

ON RIVAL SHOWS. One of the games on Celebrity Playtime features the contestants using animal sounds to perform a song. Their teammates then have to guess the title of that song.

This has prompted some people to say that this is similar to the "Kantaririt" segment of GMA-7’s new Sunday noontime show, Sunday Pinasaya.

Is Billy pressured that Celebrity Playtime might be compared with other shows with the same format?

He answered, “Ako, honestly, I just try to do the best I can as a host, I really don’t think of any competition.

“Not being overconfident or anything, kung sa akin lang, I just want to concentrate on my part, sa trabaho and I don’t know kung ano yung pinapalabas sa kabila.”

WORKING WITH COLEEN. It seems like Billy has been concentrating on TV hosting recently.

In the past, he was known as a performer and actor, and he admitted during the press conference that he misses performing.

“I do miss performing. Pero kumbaga I’m just really blessed with the opportunity na nasa stage pa rin ako and I still get to do what I love to do kasi I’m given a venue to perform sa ASAP or sa Showtime.

His girlfriend, Coleen Garcia, recently showcased her acting chops in the sexy drama movie, Ex with Benefits. Is Billy willing to work with her on a TV show or movie?

“If there’s an opportunity for us to work in a movie or in a soap, I would love to.

Billy also shared that despite the workload that he has, he still has time to spend with his girlfriend.

“Tapos after work naman, not everyday naman ako nag-te-taping for Your Face [Sounds Familiar], we tape Your Face every Tuesdays and Thursdays.