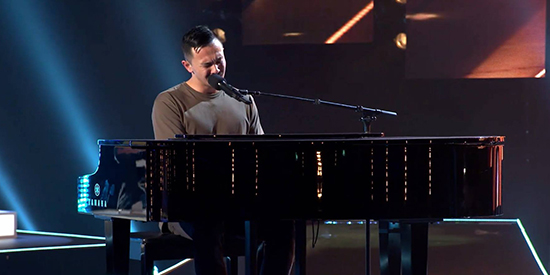 Another Filipino is making waves in an international talent competition and this time, it’s in Australia.

Filipino-Australian singer Cyrus Villanueva made it to the top 12 of X Factor Australia Season 7 for the “Under 25 Boys” category along with Big T and Jimmy Davis. The announcement was made on Wednesday night, September 23.

Cyrus and other X Factor hopefuls went to London for the Super Home Visits.

This is the first time the mentors of the competition—namely Guy Sebastian, James Blunt, Dannii Mingoue, and Chris Isaak— visited the same location instead of going to four different locations around the world.

During this round, X Factor Australia mentors sought the help of X Factor UK mentors Rita Ora and Simon Cowell to determine the final three for each category. Simon assisted Dannii and Guy, while Rita assisted Chris and James.

For his performance, Cyrus impressed the mentors with his rendition of Bob Marley’s “Is This Love.”

FIVE SEAT CHALLENGE. Before making it to the Top 12, Cyrus earned his spot on the five-seat challenge at X Factor Australia along with fellow contestants Big T, Michael Duchense, Jimmy Davis, and Andrew Lambrou.

This is also the first time the Australian talent search implemented a new system to determine the finalists for each of the mentors.

“Under 25 Boys” mentor Chris Isaak told Cyrus before his performance that all seats were already occupied and wished him good luck.

The 18-year-old university student impressed the mentors with his heartfelt rendition of Robyn’s 2010 hit song “Dancing On My Own.”

Midway through his performance, Chris was visibly having a hard time choosing the contestants for his final five.

Chris told Cyrus after his performance, “I got to be honest, before you came out, you really hadn’t made an impression on me.

“And I’m wondering, in a competition where I look for people to be consistent and deliver, I go, ‘How is it that I had missed you.’”

In the end, the American singer made the difficult decision of letting Cyrus take the seat of Justin “Panda” Maher-Smith, eliminating the latter from the competition.

Cyrus also wowed the mentors/judges with his acoustic performance of “Earned It” during the auditions.

Last year, Fil-Aussie Marlisa Punzalan was crowned the X Factor winner, making her the first Filipina to win the franchise in Australia.