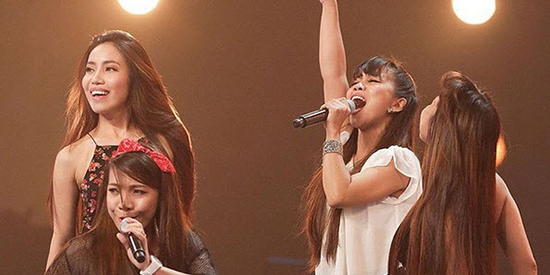 The group—composed of Mylene, Irene, Celina, and Almira Cercado—gave a smashing performance of Christina Aguilera’s “Show Me How You Burlesque” on Sunday night, October 11.

The Six-Chair Challenge of the talent competition was held at the Wembley Stadium in London, England.

"That was absolute perfection for me" - Rita Ora. Congratulations 4th Power, take the 4th seat! #SixChairChallenge

The judges—Simon Cowell, Cheryl Fernandez-Versini, Rita Ora, and Nick Grimshaw—were visibly enjoying the group’s performance. At one point, the Cercado sisters were snapping their fingers as part of their choreography before Simon joined in.

By the end of their performance, Simon was the first to give the girls a standing ovation followed by the “Groups” mentor Cheryl.

Rita was the first to give her thoughts about the group’s performance and said, “It was absolute perfection for me.”

She continued, “Literally, your voices, your adlibs, you all had a moment to show off yourselves vocally. It was like perfection.”

Simon enjoyed the group’s performance and he even invited the group to the “Overs” category, which consists of contestants over 25 years old. The British star-maker quipped, “How would you girls like to join the Overs category?”

Simon was definitely impressed with 4th Power’s performance and said, “I think you are actually amazing.”

He continued, “I think you need some help in terms of the direction of the music you should be singing but I am thrilled that you have chosen this show, this country to compete in.

“And I think, the Brits are probably gonna fall in love with you.”

Cheryl received a lot of boos when she started her comment with, “You know what? I don’t think that you’re amazing.”

The boos quickly changed to loud cheers when she gave the group the fourth seat.

Cheryl told 4th Power, “I think that you are phenomenal. You know what? You and I together can create magic, please go and sit.”

Other groups who secured a seat include Menn on Point, Alien, Rumor Has It, Mon Amie, and The First Kings. However, the six-seat challenge for the Groups category isn’t finished yet. Eight more groups are yet to perform next week before the final six for the Groups is announced.