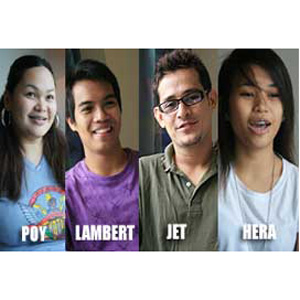 Majority of the viewers of Pinoy Dream Academy Season 2 chose Ranjit "Jet" Singh of Rizal to become the last scholar to enter the Academy. He is the replacement of Ma. Consuelo Osorio, who backed out due to personal reasons.

Jet (a.k.a. The Videojock) received 51.70 percent of the votes, making him the top choice compared to Hera "Banig" Redoblado of Davao (The Fighting Davaoeño), Catherine "Poy" Palma (The Obedient Daughter), and Lambert Reyes of Bulacan (The Singing Engineer). Lambert received 20.16 percent of the votes, Poy received 17.46 percent while Banig had the lowest percentage (10.68).


When it was announced that Jet would enter the Academy as the 16th scholar, he burst into tears and could not stop crying even when he was welcomed warmly by his fellow scholars.

PERMANENT GROUPS. Earlier tonight, June 15, Teacher Monet told the scholars what will be different for this second season. They would be grouped into two orgs (organizations) and they have to maintain grades that are higher than 7.5 or 75 percent or else they will not receive their weekly budget of P500/person/week.

The org that will win in the challenge posed by Teacher Monet will be the non-working class while the losers will be the working class tasked to clean and do menial jobs inside the Academy.


For their first task they were given a few minutes to create a homemade xylophone using several glasses and a pitcher of water. Teacher Monet tested each of their creations to see if the glasses could produce the needed eight notes. Both teams were able to hit four of the eight notes but Teacher Monet chose the group of the Pupilars as the winners since they produced the clearer notes.

The team members of One Voice were then tasked to give a bubble bath to the winners and carry all of the scholars's stuff from the storage room.