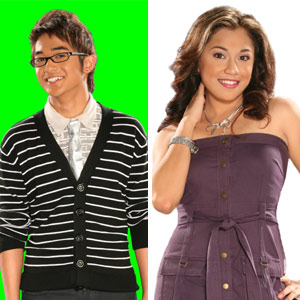 JJ Jr. (left) and Carol Leus (right) were eliminated from Pinoy Idol, reducing the number of contestants to twelve. The Top 12 finalists will now move on the gala round of the competition.


The workshop phase of Pinoy Idol drew to a close last Sunday, June 15, after a four-week period. This marks the beginning of the gala stage wherein the remaining Top 12 contestants will show their best for GMA-7's reality-singing contest.


Last week's show tugged at the contestants' heartstrings, as Pinoy Idol paid homage to dads everywhere with a Father's Day special. The contestants carefully chose songs that reflect their love for their fathers with compositions such as "I Turn To You," "Best Days," "You Raise Me Up," "My Sacrifice," and "When I Need You." These songs came with waves of emotion and were warmly dedicated to the paternal pillars of the home.

For the performance nights, the females took the stage on Friday, and the males followed on Saturday, celebrating not only Father's Day but also the end of the workshop stage.

The Top 12, announced during the Sunday results night, will have to face new challenges and will have to "move to a larger stage, where the audience is bigger, the competition gets tougher, and the pressure is more overwhelming," said Pinoy Idol host Raymond Gutierrez as he opened the show.

But despite a showcase of both high and low points in the contestants' performances, the judges—composed of Ogie Alcasid, Jolina Magdangal, and Wyngard Tracy—were, for the most part, unimpressed.

Compared to previous weeks, last week's songs were not as well received by the panel and were even exposed to criticism, ranging from the harshest to the most constructive.

By the end of the results night, JJ Jr. and Carol Leus ended their Idol journey.

Watch these hopefuls belt it out on June 21 for the performance night and on June 22 for the results night as Pinoy Idol welcomes the gala phase on GMA-7.