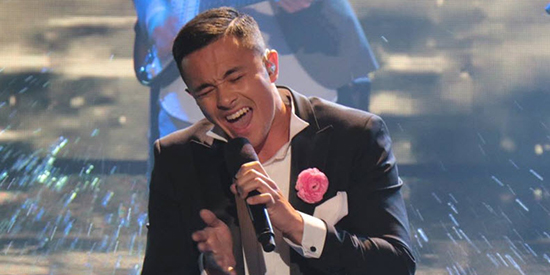 During the live show, judges/mentors Chris Isaak, Guy Sebastian, James Blunt, and Dannii Minogue were all impressed as Cyrus gave a splashing performance of “Hold Back the River.”

Cyrus received loud cheers for his rendition of James Bay’s song for the “Top 10 Hits” theme of the week. The Pinoy-Aussie singer even received a standing ovation from his mentor Chris during the performance night last Monday, October 12.

In a recorded interview before his performance, Cyrus admitted he felt pressure because his cover of mentor Chris Isaak’s song titled “Wicked Game” made it to the No. 1 spot on iTunes chart.

The 19-year-old crooner said, “There’s definitely a little bit of pressure. A lot of people are expecting another performance to that standard so I’m gonna make sure this week, I bring it.”

Groups category mentor Guy Sebastian was the first one to give his comment about Cyrus’s performance and he told him, “Your voice is incredible, anything you sing sounds amazing.

“I love that song, I love James Bay, I love your treatment about it.”

The Australian singer-songwriter continued, “I didn’t get the water but I liked it.

“I went for a bike ride today and it started pelting down with rain and I was just really mad.

“And you’re all here just playing in the water by choice.

“I did see Dannii kinda run for her life because she told me before her dress is like 30-something thousand pounds.

“And leather and water, not great, so you might have had a big deal."

Guy concluded, “It was amazing, that’s all I’m saying.”

Over 25s mentor James Blunt also had good words for Cyrus. He told him, “No wonder they put in the end because you ruined the stage.

“And wait ‘til your mother gets you home because she’s gonna be furious when she sees what you’ve done to that suit.

“You’re a fun runner, you are the man everyone has to try and beat.”

Girls mentor Dannii kept her comment short and said, “What can I say but you splashed it!”

Chris was the last to give his comment about his performance and told Cyrus: “It was a great performance but I just wanna say it was so much fun working with you backstage because you are the nicest guy, the hardest working guy, and you always deliver. Well done!”