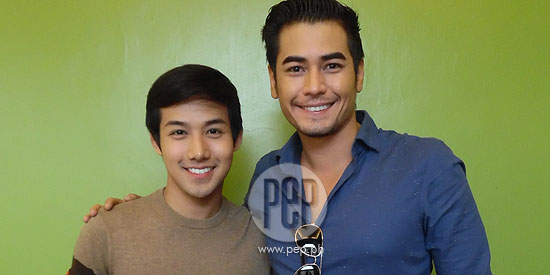 Fabio is cast as Gabrielle, the Filipino-Italian love interest of a transgender woman named Destiny Rose (played by Ken Chan).

In an interview with PEP.ph before the Kapuso Masskara Festival in Bacolod last weekend, Fabio explained, “At first, for me as a straight guy from Brazil that has a different culture, I have to do some adjustments.

“The adjusments that I really have to do was from myself na kasi I knew what I would have to go through in terms of the reactions of the fans, 'yong mga kaibigan ko, 'yong mga pamilya ko.

“Pero for me to accept the show, I knew after asking myself na, 'Am I ready for this?'”

“I realized I was ready for this,” he replied.

“I reached at the level of my career when I really to challenge myself na, to do something different.

“This was best opportunity I had to show myself that I could portray a role na I never thought in my life would be able to portray a role—to show my value as an actor, as a foreigner, as a person.”

He also noted, “For you to be able to put youself in a situation like show like this, you really have to prepare yourself about what's gonna happen.”

More importantly, Fabio added in the end, “It's good to be part of a show which try to educate people.

“We're trying to show people na we should love each other despite the sexual preference we have.

“God gave this opportunity for me to improve myself and to show people that this is to educate people to be better with one another.