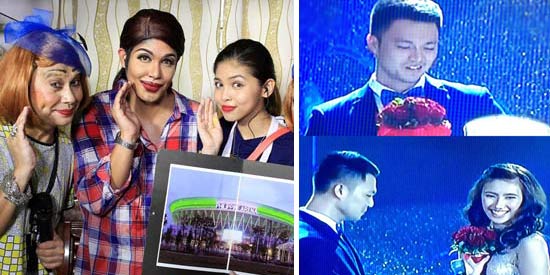 According to AGB Nielsen, #AlDubTheBigSurprise (left) got a TV rating of 38.8% while #ShowtimeLovesCebu got 9.4% in Mega Manila.

During the weekend, AlDub Nation got a big surprise while Cebuanos had the chance to bond with Kapamilya stars despite the stormy weather brought about by typhoon Lando.


ALDUB NATION TO GATHER IN BULACAN. In the October 17 episode of Eat Bulaga, it was announced that “Tamang Panahon” (right time) has already arrived for Alden Richards and Yaya Dub (Maine Mendoza).

According to Lola Nidora (Wally Bayola), fans of AlDub (aka AlDub Nation) are invited to their "bungalow," the Philippine Arena in Bocaue, Bulacan. This special grand fans day will be held this Saturday, October 24.

This serves as a gift for the fans and as a fund-raising project since 100% of the proceeds will go to the “AlDub Library Project.”

In addition, Lola Nidora has given her blessings to Alden and Yaya Dub.

She observed that Alden passed all the tests given in a span of three months, proving that he deserves the trust.

Last Saturday, the identity of Isadora was finally revealed.

However, while everyone believed that Isadora is the real mother of Yaya Dub, it turned out that she is actually the grandmother of the Dubsmash Queen.

SHOWTIME LOVES CEBU. One of the highlights of Kapamilya, Thank You: It’s Showtime, Biyaheng Cebu was the conclusion of the "Nasaan Ka, Mr. Pastillas" segment.

Angelica Yap (aka Pastillas Girl) chose Richard Parajinog of Ozamis to be her Mr. Pastillas.

Team Diyosa, composed of Manuel Chua, Kiray, and Aira Bermudez, meanwhile, was hailed champion with their "Proud to be Me" concept and won P200,000 in the biggest lip sync battle of It's Showtime's "Lip Swak Olympics."

MEGA MANILA RATINGS. According to AGB Nielsen, GMA-7'sEat Bulaga emerged as the most-watched program last Saturday, October 17. The episode that used the hasthag #AlDubTheBigSurprise got a TV rating of 38.8%.

On the other hand, It's Showtime, which used the hashtag #ShowtimeLovesCebu, got a TV rating of 9.4% in Mega Manila.

NATIONWIDE RATINGS. Kantar Media-TNS has yet to release the ratings data for October 17, 2015.