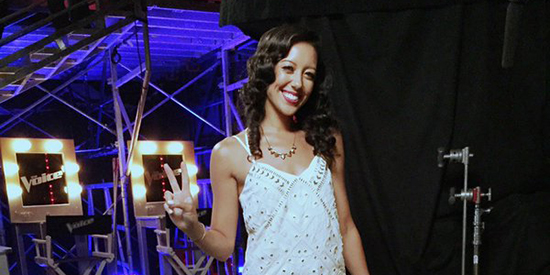 The 26-year-old singer went head-to-head with the newly-engaged couple for the Battle rounds of the reality/talent competition during the October 20 episode.

The Voice Season 9 airs every Tuesday and Wednesday at 7:50 pm on AXN. It is shown within 12 hours of the U.S. broadcast.

Both acts are under Pharell William’s team. Rapper Missy Elliot made an appearance on the show and helped Pharell on mentoring sessions with the aspirants.

After their performance, Pharell told the singers, “Jubal and Amanda, you’re like this amazing unit together.

"And Amy, there’s a delicate way about you and your approach to songs.

"I can only imagine people listening to your voice after having a tough day. You just make everything like it’s just gonna be alright.”

The “Happy” singer ultimately chose Amy to move forward to the next round.

Pharell's fellow coaches—Gwen Stefani, Adam Levine, and Blake Shelton—were all impressed by their vocal performances. However, the losing act on this Battle performance was sure to be eliminated because all the coaches already used their power to “steal” an act from another team.

Gwen was first to commend their performance and exclaimed, "That was so beautiful!"

The former No Doubt vocalist only had good words to say for both acts. She told the singers, “Jubal and Amanda, your voices are so strong and you have a whole different thing Amy because your voice is so delicate and airy and you looked like Pocahontas today. So it’s like real contrast up there but in my mind, her [Amy] on her own, she’s a star.”

Meanwhile, Maroon 5’s lead vocalist Adam Levine quipped, “I felt like Amy was like the third wheel on a date or something. She’s like, ‘Hey guys, what’s up?’

“And they’re like, ‘We got out own thing going on. We’re sharing a bottle of wine.’ There’s no way for this not to be awkward.”

Adam also felt that Amy was on par with Jubal and Amanda considering that she’s going against two fine singers.

The Maroon 5 singer told Amy, “Even though it was overpowering, you were shining up there on your own as brightly as these two were together. You’re not the third wheel, you’re awesome.”

Blake Shelton noted that Jubal and Amanda’s performance was “so much better” that their blind auditions considering that it was great, as well.

The country singer admitted the hurt that he felt when Amy rejected him and chose to be on Pharell’s team instead.

He told Amy, “The most hurtful rejection that I’ve ever had on the show was when you didn’t pick me on the blind auditions. It still hurts right now and you’re standing there smiling at me. I have a broken heart. If I had been the only chair [that turned], she would’ve been like, ‘I’m out.’”

Blake ended his comment with, “I will say that as great as they are, I just don’t know how you move forward without Amy.”

During her auditions, Amy made three chairs turn with her performance of the 1930's classic "Dream A Little Dream Of Me."

Amy is the niece of incumbent Cebu Congresswoman Gwendolyn Garcia.