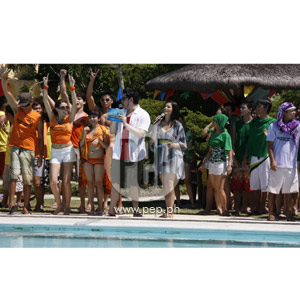 Kapuso stars bond with each other during the Kapusolympics: Watermania. The second edition of this annual sports fest will air on GMA-7 this Sunday, June 22, at the Sunday Night Box Office (SNBO) time slot.


In celebration of its 58th anniversary, GMA Network Inc. held its second Kapusolympics in a grand festival of brotherhood and camaraderie among its Kapuso stars during the day-long sports fest held at the Golden Sunset Beach resort in Calatagan, Batangas. Highlights of the June 17 event will be aired on Sunday, June 22, at the Sunday Night Box Office (SNBO) time slot.


Kapusolympics: Watermania gave the network's stars a chance to unwind in the resort owned by Ricky Reyes. Alfred Vargas, once again served as Makulay, the torch bearer who went around GMA programs during the past days to promote the event.


To wrap up GMA-7's summer campaign, water was chosen as the main theme of the Kapusolympics, signifying a fresh display of flowing ideas and surge of modernism during the network's almost six decades in the broadcasting industry. Last year's Kapusolympics gathered the stars at the Marikina Sports Complex, featuring land-based sports activities.


Six teams, each representing a color of the rainbow, competed in the games that aimed to bring out the competitive spirit of the network's celebrities. The teams were composed of the Blue Team, led by Richard Gomez; Red Team, led by Joey Marquez; Green Team, led by Wendell Ramos; Yellow Team, led by Paolo Paraiso; Orange Team, led by Marco Alcaraz; and Violet Team, led by Mike Nacua.


After lighting the Kapuso torch, the GMA-7 stars gave a grand opening number for all spectators and televiewers. Asia's Songbird Regine Velasquez, together with the Pinoy Idol 12 finalists, were part of the festive opening number.


The Golden Sunset Beach resort was the venue as well of S.O.P.'s newest concert act, "Three of a Kind." The Constellation of Stars also delivered an electrifying musical production number to the delight of everyone. Capping the water festival of GMA-7 was an upbeat dance number featuring the artists of StarStruck.

It was during this number that StarStruck 4 Avenger Jan Manual suffered burns from the torch that he was holding. According to corporate communications head Angel Javier, this accident allowed the celebrities to show their concern for their fellow artists.

Other artists who suffered injuries during the event were Bubbles Paraiso, who accidentally bruised her leg, and Wendell Ramos who dislocated his shoulder.