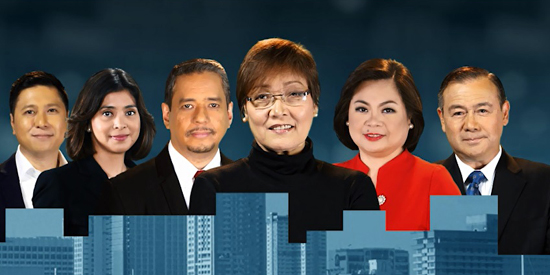 Ging Reyes, senior vice president and head of the Integrated News and Current Affairs of ABS-CBN and the managing director of ANC, says that ANC's strong team of journalists will reinforce its position as the go-to channel of business leaders and decision-makers for breaking political and business news.


The country’s leading cable news channel is set to become even better.

ANC, the ABS-CBN News Channel, will launch a new programming lineup on Monday, October 26, to solidify its leadership and better serve its viewers with top of the hour news and in-depth analysis of issues.

At the same time, the 24/7 news channel will also unveil its new look, with its signature rhombus logo now featuring refreshed colors—a change that highlights ANC’s expertise in presenting stories with context amid an ever-growing deluge of media information.

“What viewers will see is a newer and stronger ANC with a more robust and relevant lineup of programs covering politics, business, economy, lifestyle, and entertainment,” said Ging Reyes, senior vice president and head of the Integrated News and Current Affairs of ABS-CBN and the managing director of ANC.

She added, “And these shows will be more visually attractive as well—better form and better substance.”

ANC’s design overhaul will include the broadcast design of all its programs, which will prominently carry its red-and-blue scheme to show a cleaner, unified look that represents the holistic news experience ANC offers.

Right after a quick roundup of top news stories on News Now at 5 a.m., viewers can get their two-and-a-half-hour's worth of news, human interest and lifestyle stories on the new Mornings@ANC at 5:30 a.m., with a new team of anchors to keep viewers informed about what they need to know to start their day.

Leading the Mornings@ANC team are David Celdran and Ginger Conejero, who will deliver the biggest headlines and lead incisive discussions on current events.

Not to be missed are David’s interview with CEOs and influential business leaders, as well as his insightful talks on business, economy, and politics.

Aside from Mornings@ANC, viewers will also be seeing more of Gretchen on her own new program The Daily Serve, where she will give viewers a comprehensive look at the day’s major sports stories, as well as health and fitness-related information and throwbacks to the greatest moments in sports. The program will air at 6:30 p.m. on weekdays.

Meanwhile, Market Edge will also kick off its morning edition on October 26, with award-winning broadcast journalist Cathy Yap-Yang giving real-time updates from the Philippine Stock Exchange and other regional markets, insight into the top financial and economic news, and exclusive interviews with newsmakers.

It will be followed at 10 a.m. by News Now, anchored by veteran journalist Nancy Irlanda, who will bring the freshest updates in national and foreign news, business, sports, weather, and social media.

"Our strong team of journalists further enhances the ANC brand as the go-to channel of business leaders and decision-makers for breaking political and business news."