Fil-Aussie teen Cyrus Villanueva enters Top 7 of X Factor Australia; two judges get into an argument because of his performance 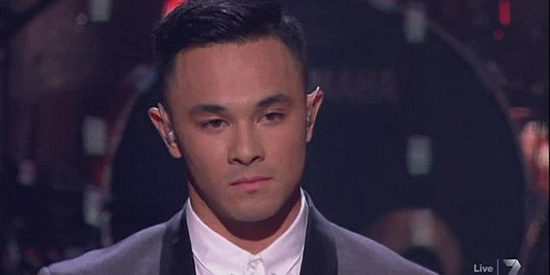 Cyrus Villanueva received mixed reviews for his performance of Lenny Kravitz’s 1991 hit “It Ain’t Over ‘Til It’s Over” during the rock-themed live shows of X Factor Australia Season 7.

The Fil-Aussie chose to perform Lenny Kravitz’s 1991 hit “It Ain’t Over ‘Til It’s Over.”

Guy felt that this number wasn’t as strong as Cyrus' previous performances on the show.

He told the 19-year-old singer, “To me that was the worst I’ve seen you perform. It was just a really terrible song, I mean, I don’t know how anyone could look at that song for rock week.”

Guy even told Cyrus’s mentor that his protege didn’t have any shining moment on the song. Guy told Chris, “I sort of have to say to you, there’s never ever gonna be a moment for Cyrus to shine in that song. It just does this the whole way through.”

The first winner of Australian Idol continued, “When Lenny does it, it’s cool and rock and roll but that was kinda like a really bad cover version. And I just think you’re amazing and that [performance] didn’t reflect who you are.”

James told Cyrus, “I think it’s a soul, funk song, not a rock song, it’s what I think.

"I think it’s inspired by Motown so listen, I don’t want to call you a cheat but I think Chris is cheating here.

James even gave an analogy, “I think if we were in a restaurant, we wanted a hamburger and you brought out pudding instead and I wanted the meat, ‘where’s the burger?’”

Meanwhile, Dannii took note of Cyrus’s “x factor” and his importance on the show. She told the aspiring singer, “I don’t think it’s your best week but I think you need to be here.”

Tension became high after Chris had a heated argument with James. The American rock singer backed up Cyrus and praised him for doing an “amazing job.”

Chris told Cyrus, “I think you did an amazing job and I think, if somebody listens to the record, you’ll hear that you did a more rock job than the original. And I think to hear James tell me what rock and roll is... I don't know what they pass as rock and roll at the disco in Ibiza, but that was rock and roll!'”

James butted in, forcing Chris to tell his co-star, “James can you just shut up for a second! I'm talking… I don't want to hear your gags right now!'

To break off the two mentors, the reality/talent show’s host Luke Jacobz intervened and said, “Let's finish this in the ad break.”

In the end, Guy’s acts--In Stereo and Jess & Matt--went head-to-head in the sing-offs. In Stereo went home after getting three votes from the judges.

Prior to this, Cyrus' performances of "Wicked Game" and "Hold Back The River" from previous episodes of X Factor Australia earned rave reviews from the judges.