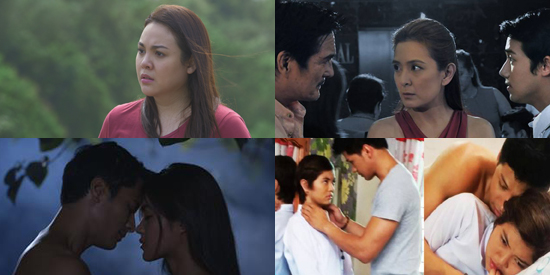 Four stories about love, deceit, honour and integrity will be seen in the episodes of Karelasyon, Ipaglaban Mo, MMK, and Magpakailanman this Saturday, October 24.

The importance of honor and integrity will be tackled in the episodes of Maalaala Mo Kaya, Magpakailanman, Karelasyon and Ipaglaban Mo.

Viewers will also get to see the TV comeback of Claudine Barretto via her guest appearance on MMK.

Here are the stories to be featured today (Saturday), October 23, on ABS-CBN and GMA-7’s Saturday drama anthologies.

ASWANG IN KARELASYON. Winwyn Marquez and Rafael Rosell are paired in the third Halloween Special of Karelasyon, which airs at 2:30 p.m. after Eat Bulaga.

Rafael plays the medical student Paolo, who had to go to the province where his father hails from.

Paolo was captivated by a woman named Myra (Winwyn), whom he first saw in a forest.

However, Paolo did not know that Myra is believed to be related to “aswangs.”

Myra was smitten and fell for Paolo. Their love story triggers the beginning of terrifying things that will change their lives.

Hosted by Carla Abellana, this episode of Karelasyon is directed by Rember Gelera.

Vin Abrenica, who has been a TV5 star since 2012, marks his first appearance on ABS-CBN through this Kapamilya show. The brother of Aljur Abrenica can still be seen in the TV5 primetime show My Fair Lady.

Lyka (Celine) is a 17-year old student who gets pregnant by her 23-year old boyfriend Donji (Vin).

At first, he promised Lyka and her mother Isabel (Yayo Aguila) that he will be responsible for what happened and proposes marriage to Lyka.

However, Donji did not fulfill his promises and neglected his reponsibilities to his family.

Isabel and Lyka then decided to sue Donji for child abuse.

The episode of Ipaglaban Mo, which is hosted by Atty. Jose Sison and Jopet Sison, is directed by Elfren Vibar.

RAPIST FATHER ON MMK. After starring in her comeback movie Etiquette for Mistress, Claudine Barretto will act once again on Maalaala Mo Kaya after 19 years.

This marks her return to ABS-CBN, years after her transfer to rival network GMA-7.

In this episode, Claudine plays Leni, who at five years old was raped and abused by her own father Ramon (Gardo Versoza). He was proven guilty of the crime and got convicted.

However, after 6 years, Ramon obtained pardon and returned home. Leni became worried about the safety of her younger sister Aileen (Mika dela Cruz). True enough, Ramon started doing lewd acts towards Aileen, prompting the teenager to run away from home.

When Leni learned about this, she searched for Aileen. It turns out that the young girl got impregnated by her own father.

Jason (Ken) was born to a rich Chinese family who taught him how to spend money wisely and be thrifty ever since he was a child.

When his grandfather died, he inherited a big amount of money that he used for his studies.

His mother Emily (Jean) was influenced by a friend to play at the casino until she got addicted to it.

Unbeknownst to Jason and husband Stanley (Cris Villanueva), Emily spent all of her money in the casino, which led to her being buried in debt.

One day, Jason and Stanley found out that Emily has already mortgaged their house, since she cannot pay her debts. The once rich family became poor because of Emily’s addiction to gambling.

Hosted by Mel Tiangco, this episode of Magpakailanman is directed by Aya Topacio.