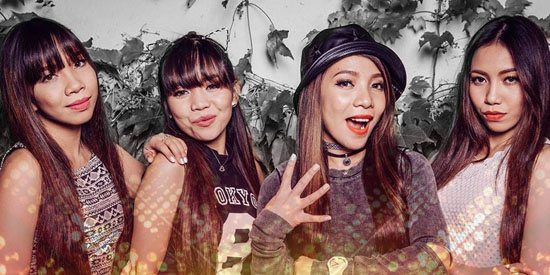 4th Impact—composed of sisters Mylene, Irene, Almira, and Celina Cercado—performed a stripped down version of Eminem's "Love The Way You Lie" at the judges' homes round of X Factor UK.

Filipino girl group 4th Impact, formerly known as 4th Power, advances to the live shows of The X Factor UK after securing a spot in the Final 12.

The four-member girl group (composed of the Cercado sisters) is the first act from their category to advance to the live shows.

The announcement was made during X Factor UK's live eliminations broadcast on Saturday night, October 24.

Cheryl tapped British singer Jess Glynne to serve as guest judge to help her decide which three acts would advance to the next round.

Unlike their previous performances, 4th Impact—composed of sisters Mylene, Irene, Almira, and Celina Cercado—chose to take out their dance routines when they did a cover of Eminem's hit "Love The Way You Lie" featuring Rihanna.

Cheryl was left in awe with the group's performance. She said, "I was choked, I got goosebumps, I feel weird."

Jess also looked amazed by 4th Impact's final audition performance and told Cheryl, "That's their last chance and they really made sure of it."

However, Cheryl expressed her worries about the girls, "Of course, instinctively they're gonna be impressed by their vocals but week 3, week 4 in the competition, I'm not sure."

After their performance, the eldest of the sisters, Irene, explained why they got emotional. She said, "We felt in our hearts that we gave everything and I'm crying because I'm proud of my sisters."

Meanwhile, Cheryl's fellow judge/mentor named Bupsi, Anton Stephans, and Max Stone as his final choices for the Over 25s category.