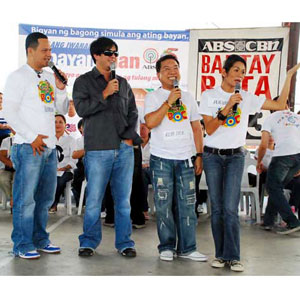 ABS-CBN celebrates its 55th year in television with meaningful contributions to the lives of less fortunate Filipinos all over the country with its new advocacy program, "Bayanijuan."

Originally conceptualized by the ABS-CBN Foundation, Inc. as an advocacy integrating all its units to help families and build communities in the poorest regions of the country, "Bayanijuan" re-imagines the Filipino volunteer spirit, or "bayanihan," as a force to create a better, more compassionate Philippines for ourselves and our children.


"We want people to know that ‘Bayanijuan' is not just a one-time project for ABS-CBN. It's a commitment to serve that goes back to ABS-CBN's conviction to be of service to the Filipino," said Head of Program Marketing Zita Aragon. "But it goes beyond network affiliation-whether you're Kapamilya or not, you can still be part of this advocacy. And it goes beyond the 55th year anniversary: hopefully we can extend this to 2009 and beyond."


The idea struck a chord in ABS-CBN President Charo Santos-Concio that she decided to make "Bayanijuan" the flagship program of ABS-CBN's celebrations for its 55th year in TV.


Just recently, the campaign kicked off with a feeding program in Bacolor, Pampanga where ABS-CBN executives led by Santos-Concio, the cast of That's My Doc, Star Magic talents, and the housemates of Pinoy Big Brother Teen Edition Plus served food, played games, gave gifts and interacted with a group of 500 children, who are taking part in a 120-day feeding program for a lahar-ravaged community maintained by ABS-CBN Foundation and sponsor Globe Asiatique.


With a tentative schedule of three events earmarked for June, including the turnover of a Bantay Bata Center in Puerto Princesa, Palawan, and a medical mission, "Bayanijuan" is estimated to soon be able to tackle an average of four programs a month.

On a national and worldwide basis, the "Bayanijuan" project was also launched with a patriotic pledge to the country, as ABS-CBN management and employees stand up as one for a special Flag Ceremony on June 12, Independence Day, together with employees from the Regional Network Group in Baguio, Cebu, Bacolod and Davao, and all the way to North America. The event, hosted by Korina Sanchez, had Christian Bautista, Mark Bautista, and Rachelle Ann Go singing the national anthem.


This is such a landmark project that all platforms were mobilized to promote its cause like the production of a music video for the theme song "Bagong Simula" featuring top rock vocalists Kevin Roy (Razorback), Marc Abaya (Kjwan), Yael Yuzon (Spongecola), Kitchie Nadal, and Grand Star Dreamer Yeng Constantino.