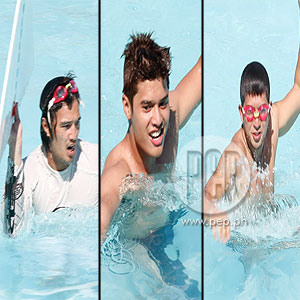 (From left) Antonio Aquintania, JC de Vera, and Dennis Trillo of the Violet team hurriedly swim to the other side of the pool after finding a piece of the puzzle underwater. This pool game was just one of the events in the recently concluded Kapusolympics: Watermania held at Calatagan, Batangas, last June 17.


GMA-7 executives issued a "no taping day" memo for the Kapuso stars last Tuesday, June 17, to give way for the second Kapusolympics held at the Golden Sunset Beach Resort in Calatagan, Batangas. The said sports event marked the 58th anniversary celebration of GMA network.

Newbie celebrities were given a chance to bond with the senior stars by putting them together into six different teams—Blue, Green, Orange, Red, Yellow, and Violet.

Darling de Jesus, GMA-7 assistant vice president for magazines, musicals, variety, and specials, said that after their first Kapusolympics last year, more celebrities showed their interest in joining such an event. "When we started it last year, 'yong after the games, maraming mga stars na, like, express their desire to participate so we were encouraged na ituluy-tuloy."

Held at the Marikina Sports Complex last year, this year's Kapusolympics: Watermania was held in Calatagan, Batangas. Ms. de Jesus said that the 8-hectare beach resort of the well-known hairdresser, Ricky Reyes, was the right place for this year's theme, water sports.

She told the entertainment reporters, it was suitable because, "One, kasi we're doing a water sport event. So, suitable kasi maraming pools at hindi lang pool kasi may dagat. Aside from having a venue for the games, aesthetically din, maganda siya to do our production numbers. And most of all kasi ito 'yong buong puso at buong palad na tinatanggap kami."

Ms. De Jesus related to the press that it took them almost a month to prepare for this big event. "Before the games we're conceptualize, pinadating muna dito 'yong mga writers." After this, they also did some ocular inspection and several test games. A week before the actual date, several staff and crew came to the resort to arrange the necessary settings for the program.

The GMA-7 executive also clarified that Kapusolympics was just part of a bigger anniversary celebration that the network has prepared for its audience. She said, "Parang ito kasi, it's fun. Parang medyo mahirap pero it's fun."

FUN AND EXCITING GAMES. The Kapuso artists were divided into six 10-member teams. These teams competed with each other in the opening game called "Tuloy-Tulay," which is a raft race held at the resort's lagoon.

After all the nine games, the Blue team emerged as the grand champion of the second Kapusolympics. The team led by Richard Gomez took home P100,000 and several gift packs from the sponsors of the games. The winning team was composed of Michelle Madrigal, Regine Tolentino, Margarette Wilson, Carlos Concepcion, StarStruck alumni Aljur Albrenica, Arci Muñoz, Jan Manual, Jesi Corcuera, and Kevin Santos.

The Violet and Red teams tied in third place so each of them received a P25,000 cash prize. The Violet team was headed by Mike "Pekto" Nacua and his members were Dennis Trillo, Rhian Ramos, JC de Vera, Antonio Aquitania, Kris Bernal, Prince Estefan, Jen Rosendahl, and Chariz Solomon.

The Yellow and Green team took home 10,000 pesos for placing fourth and fifth, respectively. Paolo Paraiso of the Yellow team cheered for his team members Ehra Madrigal, John "Belli" Feir, Stef Prescot, Glaiza de Castro, Paolo Ballesteros, and Tess Bomb. The Green team, on the other hand, did not lose hope even though their team captain, Wendell Ramos, got a dislocated shoulder while playing a game in the Kapusolympics. Wendell's teammates—Chynna Hortaleza, Arthur Solinap, Rey Talosib, Abby Cruz, and Jay Aquitania—continued playing the game even without their leader.

Although everybody competed seriously during the games, the Kapuso artists did not forget the real purpose of the event—to have bonding time with fellow Kapuso stars and to promote unity and brotherhood.

In fact, Blue team leader Richard said, "I think it's very important for the Kapuso network na magkaroon ng ganito [event] kasi it's supposed to bring everybody together, camaraderie. Once in a while may magandang outing that makes everybody happy."

In a separate interview, Ms. De Jesus added, "It's also one occasion when you get to mingle with other stars from different shows, so hindi sila naka-cluster per show. So, mas may interaction."

SPECIAL PERFORMANCES. The Kapusolympics was not all about the games, of course. There were also production numbers during the event.

Opening the program was Asia's Songbird Regine Velasquez who sang "Celebrate the Day." Ati-atihan dancers and poi spinners added color and festivity to the opening number. Each team had colorful platforms where they danced in time to the festive music. After the GMA-7 theme song was performed, the Kapuso stars let loose balloons that represented their team colors.


Asia's Songbird was later joined by the Pinoy Idol top 24. Then, the Telebabad love teams—Marian Rivera and Dingdong Dantes of Dyesebel, Katrina Halili and Dennis Trillo of Magdusa Ka, Angelika dela Cruz and Marvin Agustin of Magdusa Ka, and Heart Evangelista and Richard Gutierrez of Codename: Asero—sang "The Tide is High."