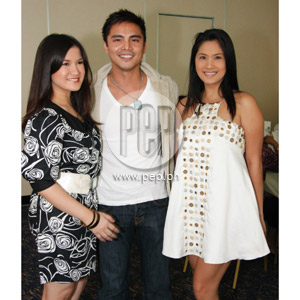 GMA-7 brings one of the most enduring drama films of all time on the boob tube. Gaano Kadalas ang Minsan—starring (L-R) Camille Prats, Marvin Agustin, and Diana Zubiri—is the latest installment in the Kapuso Network's Sine Novela roster.


GMA-7's senior vice president for entertainment Ms. Wilma Galvante couldn't have been more accurate when she mentioned that the 1982 film Gaano Kadalas ang Minsan is considered to be one of the most memorable movies in the annals of Philippine cinema.

Topbilled by the Star for all Seasons Vilma Santos together with Hilda Koronel and Dindo Fernando, the Danny Zialcita megged film instantly made its mark in the hearts of viewers for its story of love, deceit and sacrifice.

With that in mind, it is not surprising that the Kapuso Network picked the movie for its latest installment of Sine Novela. For the TV adaptation, comebacking young actress Camille Prats will play the role of Lily while sexy actress Diana Zubiri takes on the part of Elsa. Portraying the character of Louie—the man who is the center of Lily and Elsa's affection—is Marvin Agustin.

In the story, Elsa and Lily are best friends despite their economic and social differences. Elsa's family owns a hospital—the same hospital where Lily and her boyfriend Louie are employed as a nurse and doctor, respectively.

Unbeknownst to Lily, her best friend Elsa is harboring strong feelings for Louie, prompting Elsa to map out a plan to separate the two young lovers.

The rich woman gains the chance to separate the two when she paves the way for Lily to receive an offer to work abroad. Overwhelmed by the opportunity to earn more money, Lily quickly grabs the chance despite Louie's strong protest. The argument between the two eventually led to a separation. Alone and lonely, Louie was then drawn to Elsa.

Several months later, Lily returns to the country with the hope of being reunited with Louie. It proved to be too late since her ex-boyfriend and her best friend were already bound to get married. Lily vowed to stay clear of their path and start her life all over.

Fate led the three back together when Lily's son Alvin was stricken with a fatal heart malady. The young boy then asked for the chance to meet his biological father. However, Lily could not grant her son's wish. Elsa, on the other hand, was physically unable to bear a child. Upon learning of Lily's dilemma, Elsa gave an offer for her former best friend: she will lend her husband to pose as Alvin's father. Lily accepted.

Part of the set up is for the three parties to live together in one house. Lily and Louie, the two former lovers, will pretend that they're in love with each other for Alvin's sake. For Elsa, the proposal which she her self instigated, caused emotional turmoil when she shares her husband with Lily.

LIVING UP TO THE PART. For these Kapuso stars, they all admit that there's tremendous pressure in remaking a classic film, especially when portraying roles that are so identified with the original actors.

According to Marvin Agustin, as an actor it is important to study the role and the treatment done previously. But it is also important that the one tapped to revive the role must understand the value of instilling a new facet to the character.

Directing the TV version is Gil Tejada Jr., who agrees with Marvin's statement. "We remain loyal to the story and its substance, of course," he said, "but ‘yon nga, we also see to it na we'd be able to present it in a way na maa-appreciate siya ng mga modern viewers."