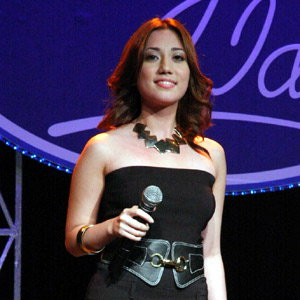 Jeni Rawolle ended her Pinoy Idol journey last Sunday, June 22. The former lounge singer is the first Idol hopeful to be eliminated in the gala stage of the reality singing contest.


After the four-week workshop phase, the reality singing competition Pinoy Idol moved on to a bigger stage at the SM Mall of Asia where the audience was larger, and the pressure, greater.

Last Saturday and Sunday, Pinoy Idol workshops officially ended and the much-anticipated gala stage started. The Top 12 finalists would have to put their best foot forward during their thematic performances in order to retain their slot in the competition.

One finalist will be eliminated per week until the final two singers emerge. Last week's theme was titled "My Greatest Performance" and showcased songs from the Top 12's best performances.

The performance night held last Saturday was a red-carpet affair, and had an elegantly dressed Rhian Ramos touring the new Idol home, ready to spice up the gala night with her very own account of the event. She happily reported the goings-on at the red carpet to Pinoy Idol host Raymond Gutierrez.

But still more noticeable than the classy red carpet and the vivid lighting surrounding the Idol stage was, to the judges, an improvement in the looks of all the finalists.

"I'm so impressed by the transformation of everybody," commented judge Wyngard Tracy, seemingly lifting the spirits of the contestants as the gala night kicked off. "Gulat na gulat ako [kasi] mukha sila lahat stars. So, in-e-expect ko, ganoon din yung performance niyo," he reminded the Top 12 as he wished them good luck.

Among the guests who came to watch were Tessa Prieto-Valdes and Dulce as well as Pinoy Pop Superstar alumni Jonalyn Viray, Gerald Santos, and Maricris Garcia.


Gretchen Espina interpreted Aretha Franklin's anthem "Respect," Warren Antig gave a lively performance with "Shout," Jayann Bautista crooned "You Make Me Feel Like (A Natural Woman)" and Toffer Rei chose the song "Honestly" to bring out his best side.


Kid Camaya once again sang the song "Ordinary People," which he performed during the June 18 press conference of the Top 12 at the Music Museum. The audience could hear the yearning in the voice of Daryl Celis when he sang "Superstar."

The Alanis Morisette song about a ruined relationship titled "You Oughta Know" was performed by Mae Flores while the power ballad "Alone" was chosen by Penelope. Ram Chaves gave an enthusiastic performance of the song "With Arms Wide Open" while Robby Navarro gained excellent comments from the judges for his interpretation of the song "One Last Cry." The young contestant, Sue Ellen sang "Survivor" of Destiny's Child but her barely survived this round when she was grouped into the bottom three along with Kid Camaya.

Jeni Rawolle performed the sultry song "Inseperable" by Natalie Cole but her effort was obviously not enough for the viewers to support her until the end. During the results night last Sunday, the 20-year-old lounge singer was voted out of the competition.

Continue reading below ↓
Catch another exhilarating gala night as the search for the next Pinoy Idol continues on GMA-7.