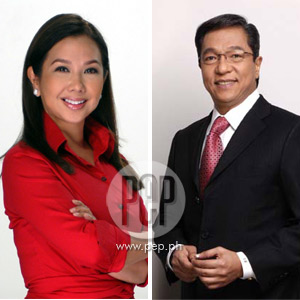 Korina Sanchez and Ted Failon will tackle controversial issues in their newest late night program Harapan, which airs on ABS-CBN on Monday nights after Bandila.


The tandem of Ted Failon and Korina Sanchez returns on TV as the veteran journalists anchor the newest weekly late night talk show, Harapan. They will separate truth from spin, give viewers a sharper take on the news, and talk to public officials on the record.

Ted and Korina bring to late night their firebrand quality of talk, for which their morning primetime radio program Tambalang Failon at Sanchez on DZMM is known for.

According to Korina, their two decades as partners on radio and TV have made their work relationship akin to a marriage. "We complete each other's sentences. In a way, he's like a broadcast husband, but with no commitments," said the female broadcast journalist. "We want change when we know it can change. But we've also gotten old and wise enough to know you can't take life too seriously."

"Shows come and go, but we are still here. It's hard to maintain a tandem through many years, but we've done it," declared Ted. "And moving that to TV will be a challenging innovation, so expect some new things."

Harapan is a spin-off of Harapan: The Jun Lozada Expose, a no-holds-barred special talk show aired by ABS-CBN News and Current Affairs at the height of the NBN ZTE controversy. It marked the first time Lozada went on air and on record to face the major protagonists involved in the issue. It was widely watched and much quoted, with no less than Lozada himself referring to it as his 1 vs. the Mob moment.

ABS-CBN Head of Current Affairs and News Production Luchi Cruz-Valdes says Harapan comes at a time when the country faces serious political and economic crises and is badly wanting analysis, synthesis, and resolution.

"Under a climate of brewing insecurity, the public seeks straight answers to their questions, not empty assurances," says Ms. Valdes. "Not knowing who to believe, people look to the media to help provide these answers, to guide them toward making crucial, informed decisions."

Ted and Korina are arguably one of the country's most successful teamups on radio and TV. They hosted the programs in DZMM such as Balitalakay (1990), Aksyon Ngayon (1991), and Tambalang Failon at Sanchez (1994 to present). On TV, their fearless tandem is best remembered in Hoy, Gising!, the public service program that made government officials answerable to the public.

One of the show's highlights will be Ted and Korina's separate takes on the issue in focus—not unlike their trademark disarming, if sometimes sarcastic, commentaries in their radio talk show. Add to that the visual elements of television, and you can expect no less than fireworks.


In their first episode aired last night, Ted and Korina sat down with those involved in the sinking of the MV Princess of the Stars of Sulpicio Lines. The ship, carrying over 700 passengers, was bound for Cebu when it capsized off the coast of Sibuyan Island in Romblon last Saturday, June 21.

Harapan airs every Monday after Bandila on ABS-CBN.