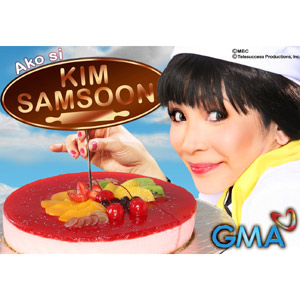 Kim Samsoon Buot (played by Regine Velasquez) is a baker-turned-pastry chef whose life will unravel in the TV series Ako si Kim Sam Soon. The local version of My Name is Kim Sam Soon will air on GMA-7 right after Dyesebel.
As part of GMA-7's 58th anniversary celebration, the Kapuso Network presents the Pinoy adaptation of the Koreanovela My Name is Kim Samsoon. This love story featuring a chubby pastry chef at a five-star restaurant will tickle the hearts of viewers and give them a healthy serving of comedy, bordering on slapstick.

Ako si Kim Samsoon, which premieres on June 30 on GMA-7's Telebabad Block, is out to make viewers roll with laughter as it boasts a different kind of story about love, family, and beauty. The original Koreanovela was a big hit in the Philippines when it was aired on GMA-7 in 2006. This prompted GMA Network officials to adapt this show, which was originally produced by MBC and Telesuccess Productions, Inc. in 2005.

Asia's Songbird Regine Velasquez will play the lovable character Kim Samsoon Buot, a baker-turned-pastry chef in her late 30's who will soon find out that love knows no age, shape, or size.

Playing her leading man in this comedy series is Mark Anthony Fernandez who portrays the role of Cyrus. He is the handsome but snooty owner of the five-star restaurant where Samsoon works. Wendell Ramos is Harvey, the weak-willed ex-fiancé of Samsoon. Nadine Samonte adds zest to the story when she plays Hannah, the beautiful ex-fiancé and first love of Cyrus. Eugene Domingo is Chef Dina, the head of the restaurant where Samsoon works.

The haughty mother of Cyrus, Mrs. Ruiz, is played to the hilt by former beauty queen Carmi Martin. Showbiz Central host John "Sweet" Lapus adds comic relief with his role as Marcus, the secretary of the domineering mother of Cyrus. Providing support for Samsoon is Sonia (Tessie Tomas), the mother of the star baker of the show.

With director Dominic Zapata at the helm, the story begins at a time when Kim Samsoon was struck by two tragedies: she was stood by her fiancé at the altar and her family suffered a setback when her family's bakery was gutted by fire. Samson then decides to apply as a pastry chef in a five-star restaurant where she crosses paths with the rich and arrogant Cyrus in a very unusual spot. While they are both inside a male comfort room, he gives Samsoon a lecture about love and men. Not long after, Cyrus discovers her innate talent for baking and hires her to work in his restaurant.

Cyrus, on the other hand, has his own set of problems. His domineering mother is pressuring him to get married as soon as possible. To avoid her nagging, Cyrus offers Samsoon to agree with his "love contract." The talented chef would pretend to be his girlfriend in exchange for a huge amount of money. The young man was confident that he would never fall for a woman like Samsoon, something that offended the lady chef. But in order to pay for her family's debts, Samsoon agreed with his proposal.

Will Cyrus and Samsoon both be brave enough to face the consequences of the love contract? Will their plan still work even if both of their former fiancés are still part of their world? Can a gorgeous guy like Cyrus fall in love with a plump, boisterous girl like Kim Samsoon?

Regine Velasquez lends her singing prowess in performing "Maybe It's You," the original theme song of the Koreanovela My Name is Kim Samsoon. Watch the accomplished singer is this deglamorized role that even requires her to wear a fat-belly suit created for this show.