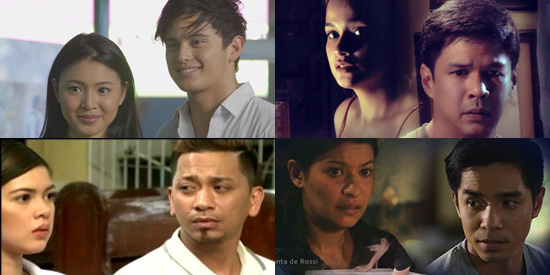 Four different stories of love will be tackled in this week’s episodes of Karelasyon, Ipaglaban Mo, Maalaala Mo Kaya and Magpakailanman.

Here are the stories to be featured today, October 31, on ABS-CBN and GMA-7’s Saturday drama anthologies.

“‘TIL DEATH DO US PART” IN KARELASYON. Assunta de Rossi will depict the story of everlasting love in the last Halloween presentation of Karelasyon, which airs after Eat Bulaga!

However, her everlasting love is combined with the supernatural.

Caring (Assunta) is devastated with the death of her husband Mario (Kirst Viray).

She finds out that Mario’s dead body has not decomposed yet years after it was buried.

Caring treats this as a sign of her husband’s comeback from the dead for them not to be separated from each other anymore. Even though opposed by many, Caring decided to bring his remains home and treat him like he is alive.

Viewers will find out how Caring will come to terms with the death of Mario and if she is willing to fall in love again.

Hosted by Carla Abellana, this episode of Karelasyon also stars JC Tiuseco and is directed by Zig Dulay.

STALKER IN IPAGLABAN MO. A replay of the June 21, 2014 episode of Ipaglaban Mo starring Shaina Magdayao and Jhong Hilario will be shown tomorrow after It’s Showtime.

Despite being always rejected by Shirley (Shaina), suitor Erwin (Jhong) has remained persistent and soon, become obsessed with the girl he is courting.

Because of desperation, it came to a point when Erwin became Shirley’s stalker, and he even climbed up her house through her bedroom window and attempted to rape her.

Shirley was traumatized by the series of events and she brought a knife for self-defense if ever Erwin would try to harass her again.

One day, Erwin sat beside her during a Church service and touched her private parts. The incident provoked Shirley to use the knife to threaten Erwin.

Furious, Erwin grabbed the knife and Shirley accidentally stabbed him in the neck, killing him.

With Erwin’s death, his mother filed charges against Shirley. Viewers will see how Shirley will fight for her rights as an abused woman.

Hosted by Atty. Jose Sison and Jopet Sison, the episode of Ipaglaban Mo is directed by Richard Arellano.

JADINE’S VALENTINE EPISODE ON MMK. The drama anthology hosted by Charo Santos-Concio will also air a replay. This time, it re-airs the 2015 Valentine episode of James Reid and Nadine Lustre.

Carmina (Nadine) is a hopeless romantic. She has always been fascinated with love stories – ranging from what she reads in novels to her cousin’s love life.

Because of this fascination, she formed her own concept of love and created a list of signs that will lead her to her Mr. Right, in her own belief, at least.

One day, a sign tells her that her suitor Yong (James) is her Mr. Right. Because of this, she immediately gives her yes!

However, Carmina continues to use signs when it comes to making decisions about their relationship. The question is, what if a sign tells Carmina that Yong is not her Mr. Right?

The episode of MMK is directed by Frasco Mortiz and airs after Home Sweetie Home.

Married couple Max (Raymart) and Flor (Yasmien) decided to live in an old house in Manila, but soon, they experienced eerie things happening inside their residence.

They decided to leave their house but terrifying events still happened to them, even reaching to the point where spirits played with their child and her life was put in danger.

The series of eerie events was actually a sign for Max about the mission that dwarves wanted him to do. Max accepted the mission just to put his family away from danger.

However, everytime Max tries to stop healing people, horrifying events begin to happen again in their family that affected his relationship with his wife.

How will Max choose from two things that both put his family in danger?

The episode of Magpakailanman is directed by Michael De Mesa and airs after Pepito Manaloto.