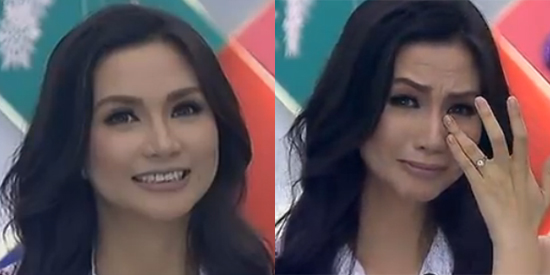 Mariel Rodriguez-Padilla became emotional during her return to the Pinoy Big Brother house. Big Brother told her: “Hindi mabubuo yung sampung taon na 'yon kung wala ka. You will always be special, Mariel. At lagi kang may lugar dito sa bahay ko. And it looks like we’re back where we started.”

In the November 2 episode of PBB 737, Mariel learned about the task she is set to do for the Regular Big Four (Miho Nishida, Roger Lutero, Dawn Chang and Tommy Esguerra) and the Teen Big Four (Jimboy Martin, Franco Rodriguez, Ylona Garcia and Bailey May),

Viewers also got to see Mariel’s tearful reunion with Big Brother inside the confession room.

Kuya asked the actress what kept her busy.

“Well I’m married. We all are! Yung Kuya’s Angels, we’re all married, older and wiser.”

Big Brother then played a clip of his conversation with an emotional Mariel in the famous yellow house way back in 2007 during the Pinoy Big Brother Celebrity Edition 2.

This was the time when Mariel accompanied housemate Jon Avila and she got trapped inside the PBB house. Big Brother told her back then that she will serve as a houseguest and will stay for the house for several months.

Mariel got teary-eyed when she saw the video.

Big Brother then informed Mariel about her mission inside the house.

She was tasked to help viewers decide who to vote for as the Big Winner.

Big Brother instructed her to get a box containing a medallion representing the Big Winner. Big Brother wanted Mariel to personally bring it and show it to the housemates.

Mariel then went inside the house and the housemates warmly welcomed her.

PRANK. After the housemates welcomed and toured her inside, Mariel narrated to them how Kuya locked her inside the PBB house.

“I was hosting, then I brought a housemate in. And when I got here, I wasn’t allowed to leave anymore.

“And I stayed here for several months. That was what happened to me. Super crayola ako, di ba? Iyak ako ng iyak na talagang end of the world.”

Kuya then showed a throwback video of Mariel crying inside the confession room.

She continued, “And I ended up liking it. I enjoyed it so much. I learned so many things.”

Mariel chatted with the housemates and asked them who they think deserves to be the big winner.

In the middle of their conversation, Big Brother instructed Roger to get a gift box for Mariel. The TV host felt tense since she had an inkling that she might be locked again inside the house.

When Mariel opened the box, she saw a set of towels with her name embroided on it, which made the housemates excited.

In previous editions, the set of towels given to the guests indicated that they will be staying inside the house for many days.

“No, I have no clothes, this is not gonna happen.”

The PBB Celebrity Edition theme song “Sikat Ang Pinoy” was then played in the house, adding to the tension of Mariel.

She reminded herself and the housemates, “Oo nga, it was Celebrity Edition kasi when I entered, e.”

At this moment, Mariel said she’s almost sure that she will stay inside the house for a long time.

In the meantime, Mariel bonded with the girls inside their bedroom and borrowed some slippers. After a while, Roger brought inside a luggage trolley for Mariel.

The TV host then inspected the luggage and saw that it contained her clothes.

RELATIONSHIP WITH ROBIN. Inthe living room, Jimboy had a talk with Mariel and asked her to tell stories about Robin Padilla, Mariel’s husband.

“Kunyari something that didn’t go well, sasabihin niya, may kalungkutan.”

REMINSCING WITH KUYA. At this point, Big Brother called Mariel to go inside the confession room.

The “Kapitbahay ni Kuya” then told Big Brother, “That’s so sweet, thank you, I appreciate it, iu-uwi ko yun.

Mariel then happily told Big Brother, “By the way, I’m so happy that we made it clear na props lang yung stuff inside, thanks!”

Big Brother then told Mariel that it’s time for her to leave. The TV host returned inside the house and wished the housemates luck.

“I’m gonna go and I wish you all good luck. It was really nice meeting all of you.

When Mariel returned to the confession room, she became emotional after Big Brother’s parting words for her.

Mariel then told Big Brother, “Big Brother really made an impact in my life also and I’m very grateful that’s why I’m here today no matter what.

“I’m here to celebrate the ten years with you.”

“At lagi kang may lugar dito sa bahay ko. And it looks like we’re back where we started.”

Mariel is set to return to the house to present challenges to the housemates before the Big Night takes place in Albay on November 8.