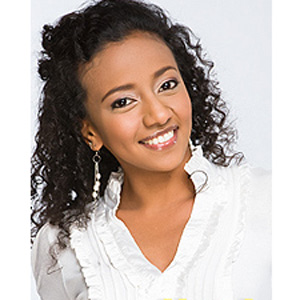 This is the second time that Liezel Garcia has been named the Star Scholar of Pinoy Dream Academy Season 2.

In a night that showcased songs representing the scholars' life as students, Liezel Garcia proved herself to be one of the contest's early frontrunners as she was once again named the Star Scholar during the second Gala Night of Pinoy Dream Academy Season 2.

Liezel got an average score of 8.87 (out of 10) from resident jurors Louie Ocampo and Gerard Salonga and guest judge Isay Alvarez for her rendition of Whitney Houston's "Count on Me." Her performance was far from perfect; Gerard, an acclaimed musical director, said Garcia failed to connect with the audience since he could not recognize whether she sang for the audience or for herself. Even Pinoy Dream Academy Headmaster Ryan Cayabyab said The Pride of Puerto Galera tried too hard to impress, perhaps because of the pressure of being named the top performer last week for her rendition of "Dance with my Father." Still, Gerard said Liezel managed to impress listeners because of her "very nice" vocal skills. She was given the opportunity to give her mother a necklace as a prize for being Star Scholar.

The two other top scholars named last night, June 28, at the PDA Concert Hall were Jay "Bugoy" Bogayan, who sang "Can't Take My Eyes Off You" and Laarni Losala who sang "As If You Never Said Goodbye." Bugoy—whom the academy mentors said was the most improved scholar for this week—wowed Gerard with his impressive voice and song arrangement. Laarni, who was among the first probationary scholars, proved she could hit high notes perfectly.

However, the other scholars failed to leave a favorable impression on the judges. Although commended for singing the chorus of the song "Farewell" in Chinese without sacrificing its message, Gerard said there was nothing special with Miguel Mendoza's performance. According to stage actress and singer Isay Alvarez, Van Louelle Pojas was not able to convey the message of his song "Next in Line" to the audience. Last week's fourth placer Cris Pastor received perhaps the most scathing comment last night after her "sexy" rendition of "Come Together by The Beatles." Gerard said "Come Together" was a wrong choice for Pastor since her arrangement did not fit the song. "‘Come Together is not a sexy song," he said, adding her last note did not leave a good taste in his mouth. The brother of Lea Salonga was equally harsh to Michelle "Sheng" Belmonte. "I didn't like that," he said after Sheng finished singing Basia's "Time and Tide." He even branded her performance as "pretentious."

The other PDA scholars tried to up the ante last night, with mixed results. Gerard said Ranjit "Jet" Singh ("I Will Be Here") fell short due to his limited vocal ability while Bunny Malunda's version of "You've Got a Friend" was challenging but without its usual sincerity. Louie commented on Ross Dio's facial expressions when he sang "King and Queen of Hearts," saying he looked as if he was reading from a teleprompter. Isay commended Hansen "Sen" Nichols ("I Believe I Can Fly") for his stage presence but said his song was a wrong choice for his vocal capabilities. Louie said Apple Abarquez was evidently nervous when she sang "Through the Years."


Chivas Malunda, who was expelled this week due to health reasons, performed Pink's "Just Like A Pill." He appeared in the gala night as a guest performer.

Tonight, June 29, the mentors will announce the second set of probationary scholars. Who among the bottom four scholars will be saved by the mentors and scholars? Who will be the two scholars who might leave the Academy next week? Stay tuned from Monday to Friday to Pinoy Dream Academy Season 2 Uberture, 5:30 PM, and Pinoy Dream Academy Season 2 Primetime, after My Girl on ABS-CBN. Viewers can also watch the PDA Scholars everyday on Studio 23, 12:00-2:00 PM.