COMMENTARY: Richard Gomez, Dawn Zulueta deliver authentic portrayal of a troubled couple in You're My Home 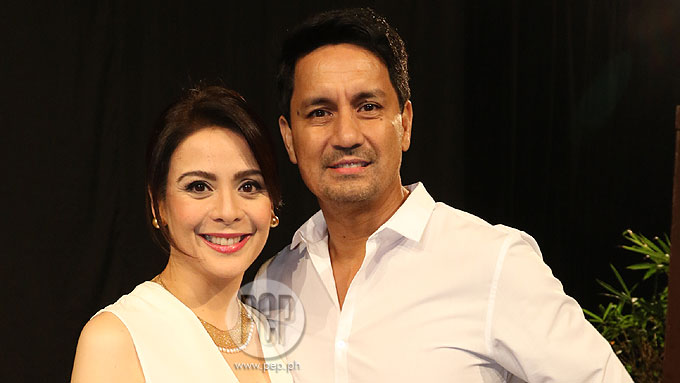 You're My Home dares to ask relevant questions about the dynamics within the family and how it shapes a person's life and contribution to society. The CharDawn love team of Richard Gomez and Dawn Zulueta is featured in this family drama about standing up for one's principles and dealing with a traumatic kidnapping incident.

You're My Home is a testament to what makes or break a family when put to the test.

Topbilled by Richard Gomez and Dawn Zulueta, the first three episodes of ABS-CBN's newest primetime soap is bound to take viewers to a rollercoaster of emotions.

PEP.ph was able to watch a preview of this teleserye during the advanced screening held last November 9 at the Dolphy Theater, ABS-CBN compound.

At the heart of You're My Home is a seemingly ideal married couple (Gabriel and Marian Fontanilla) dreaming of a better life for their three charming kids.

A man of good principles, Gabriel strongly believes in fighting for justice especially for the oppressed.

But soon he will be torn between honor and the desire to give only the best things in life for his beloved family.

Such theme is very timely and relevant, especially since Gabriel is not just a human rights lawyer but an aspiring mayor at that.

Gabriel has frequent disagreements with his wife Marian since he is going against everything he believed in as he becomes consumed by his need for power.

CHARDAWN'S GRIPPING SCENES. These are actually the must-watched scenes in the first three episodes of the teleserye as Richard and Dawn prove once again that they are more than just a kilig tandem.

Their dramatic prowess is undeniable as their characters shift from being the ideal husband and wife into what seems to be a drifting-apart couple.

One can't help but feel affected by the emotional and mental anguish of not being understood by the person you love most.

Here's a sample of their lines that troubled Filipino couples can probably relate to:

Both Dawn and Richard gave depth to their characters as they fight about their core values.

Dawn gave a gripping portrayal of a wife who falls into the trap of romanticizing her husband, only to be disappointed when she sees his selfish ambition.

Richard also projected the same authenticity with his characterization of a good family man, whose core values are put to the test when faced with the allure of wealth and power.

ELEMENTS OF SUSPENSE, TRAGEDY, SELF-REFLECTION. Kudos to Director Jerry Lopez-Sineneng and the rest of the creative team for succeeding in interlacing a family drama with elements of suspense and tragedy.

From the first episode, it was clearly established that the ideals of the Fontanilla would break apart with the colorgraded scenes that signify tragedy in the family.

Adding to the feeling of suspense in the teleserye is the use of objects that serve as clues hinting what will happen next.

There's that fluctuating light bulb in front of the gate, the broken vase as Grace (eldest child of the Fontanillas) angrily ran away from a conversation with her parents, and the other half of a rubber slipper that Marian found when her youngest son Vince went missing.

At the same time, the establishing shots of the Fontanillas' newly-purchased house prompt viewers to reflect on what it really means to have a happy home.

Does a bigger house guarantee peace, love and happiness among the family?

Is it about living simply or is financial security worth taking the risks for the sake of the kids?

More importantly, is a house still a home when the husband and wife fight all the time, and the kids consequently get affected by it?

POLITICAL PROPAGANDA? While it is true that ABS-CBN (and other TV networks for that matter) already tackled politics in past teleseryes, You're My Home makes it all the more relevant at a time when the country is gearing up for the 2016 elections.

For one, Gabriel Fontanilla is a respected human rights lawyer who unexpectedly becomes chummy with a mayor with a bad reputation.

Gabriel gets lured by the promise that he'll become the next mayor as long as he remains loyal to the incumbent mayor.

Another character, Senator Vergara (played by Tonton Gutierrez), aspires for a higher position but his political plans are hindered because of the scandals of his son Christian (played by JC de Vera).

These fictional characters somehow give a glimpse to what happens behind closed doors in the world of politics.

So far, the political element in the story seems to encourage viewers to look beyond the superficial and not easily believe what is projected in the media.

GOOD CASTING. All in all, You're My Home promises a well-chosen ensemble of stars as well as solid story that will keep viewers glued on TV.

Kudos to JC de Vera for making an impression with his portrayal of Christian Vergara, a senator's son is charged with frustrated murder and drug use.

He gives credence to his role not just with the delivery of his lines, but the way he obviously internalized the mannerisms and facial expressions of a guy who's hiding dark secrets.

The young cast also did a great job of performing their roles.

Belle Mariano (who played the young Grace Fontanilla) and her maldita classmate reminded this author of the feisty confrontation scenes of Kathryn Bernardo and Julia Montes in Mara Clara.

Bugoy Carino (who played the young Ram Fontanilla) also matched the dramatic portrayal of the rest of You're My Home's lead stars especially during his angsty scenes with Belle.

And of course, Raikko Matteo (young Vince) proved to be a charming bunso especially when he uttered the line “I ser (swear/promise)!”

You're My Home airs on ABS-CBN primetime block right after On The Wings of Love.