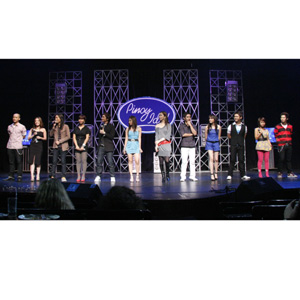 Jeni Rawolle and Mae Flores were the two contestants who were previously eliminated, leaving only the Top 10 hopefuls in Pinoy Idol. Who will be eliminated next?


The Top 10 of Pinoy Idol now face more challenges, have higher risks to take, and tougher competitors to beat. These are what the remaining Pinoy Idol Top 10 finalists have to deal with as the much-anticipated Finals Night draws near.

Earlier this week, the Idol hopefuls were busy enhancing not only their performance but also their appearance on stage and offscreen. Experts such as Olen Lim were tapped for personality development, Chechel Joson for hair and make-up and styling concerns, and Regine Tolentino for dance were personally assigned to keep a close eye on all the finalists and guide them as they prepare for bigger, tougher things to come.

Pinoy Idol executive producer Perry Lansigan certainly meant business when he told the 10 finalists to take all the upcoming activities seriously as it is going to be no joke for all the finalists.

"Everybody should be prepared because things are getting tougher in the competition and the activities that they are going to encounter—including a series of mall shows and radio tours—require utmost discipline and professionalism," said Mr. Lansigan.

Although there were great improvements in the performances every week, but the Pinoy Idol judges Ogie Alcasid, Jolina Magdangal and Wyngard Tracy continue to clamor for more. Surely, it is as if to say that we definitely haven't really seen the best of the Pinoy Idol finalists yet.

For two consecutive weekends, we have seen the finalists showcase their singing talents with their respective performances. In the 1st Gala Performance and Result Night, the Top 12 finalists got rave reviews with their "The Performance of My Life"-themed song renditions. Unfortunately, Jeni Rawolle of Iloilo City fell short of the votes needed to keep her in the competition.

In the 2nd Gala Performance and Result Night, the remaining 11 finalists somehow did not manage to come up with outstanding performances as the judges continually debated on each performance. Those expected to get good reviews from the judges seem to have not met their expectations that night. Toffer Rei of Iloilo got disappointing comments from both Wyngard and Ogie with his intention to go ballad via Mark Sherman's "Changes In My Life." "Kulang ka sa power," said Ogie while Wyngard did not approve of his decision to try his hand in ballad saying "hindi bagay sa iyo ang kanta."

Although, Ogie and Jolina both loved Kid Camaya of Pampanga's singing of the Dione Warwick hit "I'll Never Love This way Again" but Wyngard was not at all satisfied with the performance. Robby Navarro of Pampanga also got mixed reactions from the judges with his rendition of the Linda Rondstadt ‘70s chart-buster "Someone That I Used To Love" with Ogie saying that he "over-sang" the already very sad song. Good thing, Wyngard loved his performance and advised him "to keep it up."

There were surprises on some performances though, most notably Baguio representative Warren Antig's performance of the rock hit "You Give Love A Bad Name" that got A-positive ratings from the judges especially Wyngard who commented that Warren was "in his element" that night. Another surprise came from Daryl Celis of Rizal who did his own interpretation of the mushy Dingdong Avanzado-ballad "Basta't Kasama Kita."

But the all thumbs-up performance came from Cagayan de Oro's Ram Chaves who sang Yano's "Banal Na Aso, Santong Kabayo" with ease and style, urging Ogie to comment that "he's hypnotized" with the performance.

Obviously, lady luck did not smile at Mae Flores of Marikina that night because aside from hearing unsatisfying remarks from the judges, she also got the lowest votes that made her Pinoy Idol journey finally come to an end.

Now that the Pinoy Idol finalists are narrowed down to 10, expect all the remaining hopefuls to gear towards something that is far from the ordinary in terms of performance and appearance as they are once more going under the meticulous eyes of the judges. Pinoy Idol airs on Saturdays after Pinoy Records and on Sundays after Kap's Amazing Stories on GMA-7.