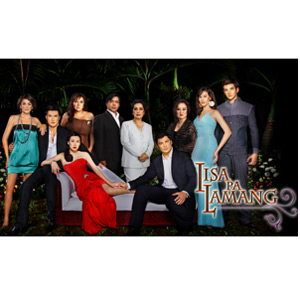 "More than the casting, it's really the overall story and its elements that made all of us fall in love," said Direk Ruel about their new project during the July 8 press conference at the Plaza Ibarra restaurant in Quezon City.

LOVE AND TRAGEDY. In the story, Catherine Ramirez (Claudine) is a provincial lass loved by two men—Miguel Castillejos (Diether) and Raphael Torralba (Gabby). The three childhood friends remain close even as they live different lives. But because of an evil plan concocted by Miguel's mother Isadora (Cherry Pie Picache), Catherine's beautiful and peaceful life will be shattered. She will fall into an abyss of lies, deceit, and betrayal.

After marrying a rich haciendero, Isadora is the most powerful woman in Amadesto, Batangas. She always has to have her way especially when it comes to Catherine and her loving grandmother Aura (Ms. Susan Roces), who serves as Catherine's inspiration and source of strength. In the midst of the problems and challenges they face, the two continue to hope and fight for what is rightfully theirs.

Due to his mother's insistence, Miguel weds the wealthy Scarlet dela Rhea (Angelica Panganiban) without Catherine's knowledge. Catherine is overcome by hatred and wants to seek revenge. Even so, Raphael continues to be there for her. His love for Catherine is pure, even if his mother Estelle (Laurice Guillen), who happens to be Isadora's friend, disapproves of his choice.

Catherine will try her utmost best to recover from her painful past while weighing her feelings for both Miguel and Raphael.

Much has been, of course, about the dramatic scenes of the series, which according to Cherry Pie were all "totoo." The physical and emotional demands, particularly on the lead actors, were also enormous.

Talking about her kissing scenes, Claudine revealed that she and Diether drank a bit of wine first to ease their nerves. "Para na kasi kaming magkapatid, we grew up together, kaya siguro may ilang," she explained. She even added that she's more comfortable with Gabby simply because she does not share any personal relationship with him.