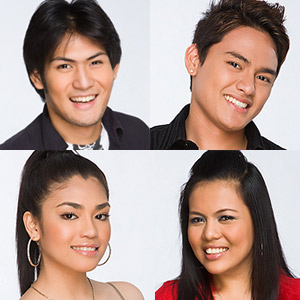 The 7th Gala Night marked a lot of firsts in PinoyDreamAcademySeason 2: the first performance of the Headmaster's List of Ten, the first Gala Night with a live band, and the first graded performance of honorary scholar Poy Palma of Zamboanga. Another first in the two-season history of PDA: in a twist reminiscent of Pinoy Dream Brother, the scholars were pitted in a face-off challenge last night, August 2, at the PDA Concert Hall in Quezon City.

Two scholars battled head-to-head; the contestant with the lower grade automatically landed in the bottom five regardless of overall ranking.

Liezel Garcia and Laarni Losala's match-up was a given, considering resident judge Gerard Salonga's comment last week citing the two as the top female vocalists of the competition. But it was the Liezel who emerged as the winner of the match with her rendition of Beyonce Knowles's "Listen." Guest judges Jimmy Bondoc and Ivy Violan agreed with resident juror Louie Ocampo when he said Liezel's performance was "the performance of the night." The four-time top scholar earned an overall score of 9.67, the highest score for a solo performance this season.

Likewise, Laarni got some love from the judges for singing "Di Ko Kayang Tanggapin." "As far as voice-wise, I was surprised. The texture was correct. I enjoyed it," Louie said. Laarni received a score of eight for her rendition of the April Boy Regino song. The resident juror further praised Laarni after her duet with honorary scholar Poy Palma. After they sang "And I'm Telling You," Louie said, "For the first time, I am truly, truly in love with your singing, Laarni."

Meanwhile, it was a close call for Bugoy Bogoyan, another consistent top scorer. Although Jimmy said Apple Abarquez's ‘We Are Family" was "slightly better" than Bugoy's "Nakapagtataka, it was Apple was landed in the bottom five with a score of 6.58. This is the first time Apple became part of the bottom group. Louie's preference, however, was spot on-he said he liked Iñaki Ting's "I'd Do Anything For Love" (But I Won't Do That) compared to Miguel Mendoza's "When Doves Cry," although Louie added he saw improvements in Miguel's singing. "I can't help but not compare you to your past performances. And I must admit I did enjoy your performance tonight, kasi ngayon may mga kulot-kulot ka sa nota na wala naman dati...nakakasurprise. I've seen you grow musically. Although di pa rin perfect, it's nice to know that you are improving," he said of Miguel's performance. Miguel received a grade of seven.

Another scholar who had previously steered clear from the bottom group, Van Pojas, failed to maintain his spot-free record. His rendition of "Through the Fire" did not impress Ivy and earned him a 5.60. Instead, the judges favored Hansen Nichols's "Bailamos," his second Enrique Iglesias song so far. Cris Pastor's "It's Raining Men" also managed to beat Bunny Malunda's "Satisfaction," which earned her 5.17 points.

Although Poy failed to become Star Scholar this, she received raves from Ivy when she sang "Free Your Mind." "Pro na pro ka kumanta. And you're the person to beat, really... I really see the potential and versatility in you," she said.

In a curious decision, the mentors saved Bunny from probation despite getting the lowest grade of the night. With this, Liezel and Bugoy are the only remaining scholars who haven't been part of the bottom group. Who among Van, Laarni, Apple, and Miguel will go home next week? Catch PinoyDreamAcademySeason 2 Uberture, Mondays to Fridays, 5:30 PM, and PinoyDreamAcademySeason 2 Primetime, after My Girl, on ABS-CBN. Viewers can also watch the PDA scholars everyday on Studio 23, 12:00-2:00 PM.