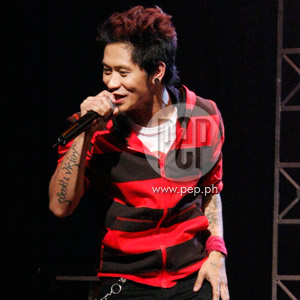 Pinoy Idol judge predicted that Warren Antig (in photo) might be eliminated from the reality singing competition because of his faulty singing. True enough, the twenty-year old singer was voted out in the August 3 episode of the GMA-7 show.


The Pinoy Idol stage was filled with the relaxing tunes of the classics last week as the country's premiere balladeer Basil Valdez mentored the reality singing competition's Top Six contestants. The remaining Idol finalists rendered their own interpretations of songs popularized by the legendary music icon, and received professional advice from Basil as well as from Pinoy Idol's very own judging panel—Ogie Alcasid, Jolina Magdangal, Wyngard Tracy.

First on the Idol stage was 21-year old Jayann Bautista who sang "You"-the lone English song for the night. During a one-on-one rehearsal with Basil, she was given pointers on how to improve her performance—advice that she clearly took to heart.

"Maganda nga na you took my word sa first stanza," praised Basil after her performance, referring to his advice on giving extra attention on the first few parts of the song. "Natumbok mo yung notes," he added.

Wyngard seemed to have the same opinion and remarked, "I liked the version. Medyo mababa lang ng onti yung pitch, pero I liked it very much. Ibang-iba. Not the usual version that Mr. Valdez did."

Both Ogie and Jolina, however, thought that there were too much vocal stylings going on. "Dahil nilagyan mo pa ng mga style, parang gumulo lang sa akin ng konti," observed Jolina. Ogie agreed and added, "It started really good. Smooth...and then, kung ano-ano na ginagawa mo," he told Jayann. "Jolina's right," he pointed out. "You should've sung it simply, but from your heart."

Kid Camaya interpreted "Paano Ba Ang Mangarap," a song which the 24-year-old Idol hopeful admitted to have memorized by heart along with other Basil Valdez classics. During rehearsals, Kid was surprised to have been applauded by the music legend himself.

"Ang gusto ko sa 'yo ngayon, nakikita ko lumalaban ka na, e," praised Ogie. "At kumakanta ka na. I have to disagree with Wyngard. I don't think it was just good. I think it was excellent."

Pinoy Idol's resident rocker Ram Chaves opted to take a different route this time and sang a reggae-inspired version of "Ngayon at Kailanman." He dedicated the song to his wife and to his Dubai-based father, both of whom were seated in the audience.

Like Kid's performance, Ram's performance was also lauded by the three judges who praised the Cagayan de Oro local for injecting a lively energy into the performance.

Twenty-year-old Gretchen Espina interpreted "Gaano Kadalas Ang Minsan." Gretchen clearly sang the song with much heart, and was teary-eyed after her performance.

Ogie lauded her interpretation and said, "I think you're showing maturity in your singing. Ang ganda-ganda. I really liked it. Ngayon hindi na magalaw yung mga kamay mo. I'm so proud of you. That was really well done."

Even Wyngard, who always seems very hard to please, was impressed. "That was very good. Basta lagi mo lang aalalayan or aalagaan yung papaano mag-teterno yung pagkanta mo at pag-arte. Pero it's okay, you're getting there. Very good."

After praising Daryl for showing emotion and being emphatic in his singing, Ogie also shared his advice for the Idol hopeful. "For you to stay in this contest, you really need to brush up on your singing. Tamaan mo yung mga nota mo lagi. Sana maka-abot ha, sana makahabol ka pa."

Wyngard admitted that the song was a hard piece to sing, and congratulated Daryl for being able to pull it through. "Hindi mo ginaya si Mr. Basil Valdez. You've been very consistent lately. I-improve mo pa at pagpatuloy mo lang."

The twenty-five-year-old Warren Antig received some of the harshest comments given out that evening. He sang "Kung Ako'y Iiwan Mo," a performance that garnered criticisms from the panel.

"I think this is your most nervous performance," observed Ogie. "Nagkawatak-watak lahat ng nota. You were really out of tune. I don't know what you did to that classic," he said gloomily. "Nahirapan ako doon. I really had a hard time listening to you."


During the results night, Warren Antig, indeed, got voted out of the competition just as Wyngard predicted.

Next week, the pressure mounts as it was revealed that two of the remaining five contestants—Ram Chaves, Gretchen Espina, Kid Camaya, Jayann Baustista, and Daryl Celis—will be eliminated.

Pinoy Idol host Raymond Gutierrez also announced that on August 17, the remaining Top 3 contestants will have to go head-to-head in pursuit of the first Pinoy Idol title. This shall serve as the Finals Night for the show.

Don't miss the upcoming episodes—Saturday for the performances and Sunday for the results—as the remaining Top 5 finalists showcase their Greatest Idol Performances with their very own song choices and arrangements.

Catch Pinoy Idol after Pinoy Records on Saturdays, and Kap's Amazing Stories on Sundays, only on GMA-7.