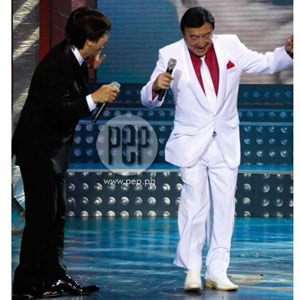 Dolphy (right) is grateful for the honor and recognition that is heaped upon him during his 80th birthday. During one of the segments of The King of Comedy: Dolphy at 80, the veteran comedian performed a dance showdown with Willie Revillame (left).


Wearing an impeccable white suit and matching pants, Dolphy looked every inch the royal King of Comedy that he is. He listened graciously to the speeches, the production numbers, and the tributes that were made in his honor during the TV special dubbed as The King of Comedy: Dolphy at 80.

The star-studded celebration took place at the Meralco Theater last July 31 and was aired on ABS-CBN last Sunday, August 3, as part of the Kapamilya Network's Sunday's Best.

During the first part of the evening, the juvenile comedians of Goin' Bulilit participated in a skit and song-and-dance numbers reminiscing about the colorful career of the comedian whose real name is Rodolfo Vera Quizon.

Black-and-white footage of Dolphy dancing across the screen was shown to the audience as young dancers gave a modern twist to the vaudeville performer's dance moves. The veteran comedian clapped enthusiastically when Carmi Martin and Roderick Paulate showed their dancing prowess on stage.

One of the highlights of the evening was the VTR showing Dolphy in a candid recording session with Vic Sotto. Vic begins by singing "Maalala Mo Kaya" while Dolphy interpreted the song by using sign language. Through his gestures, Dolphy showed that he still has what it takes to make people laugh. In fact, the 80-year old comedian will show his comedic skills once again for the big screen when he topbills the movie Dobol Trobol opposite Box Office King Vic Sotto. This movie is scheduled to open in theaters nationwide this August.

During the latter part of the evening, Willie Revillame calls Dolphy up on stage to allow him to give his speech. As Dolphy went up the stage of the Meralco Theater, the audience stood up to give a standing ovation to the King of Comedy. The Wowowee host asked Dolphy to demonstrate his famed dance moves but he refused at first. After some prodding, Dolphy obliged by tap dancing on stage, reminiscent of his vaudeville days.

Before the night ended, the Kind of Comedy gave a touching speech recalling his humble beginnings in showbiz. "I can say that this is the happiest year of my life," says Dolphy gratefully. "Natatakot nga ako na tumaba ng tumaba ang puso ko, baka ma-bypass na naman ako," he jokes.

After his speech, the crowd once again showed their appreciation for the man who has given the gift of laughter to Filipinos for the past five decades.