Gods and goddesses roam the earth in "Dyosa" 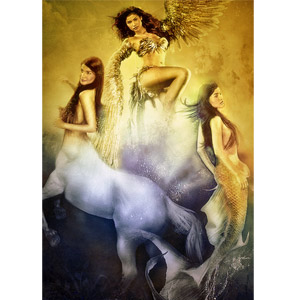 Anne Curtis will be a powerful goddess with thre personas—(from left) Dyosa Tierra, Dyosa Cielo, and Dyosa Agua—in the upcoming fantaserye Dyosa. It will air on ABS-CBN starting August 11, 2008.


Fishes of all sizes, stingrays, and an occasional shark swam leisurely in a 25-meter long aquarium in the function hall of the Manila Ocean Park. This huge glass display served as the backdrop of the presidential table of the Dyosa press conference that took place last Monday, August 4, at the marine themed educational facility at Luneta Park in Manila.

Even the stars of this ABS-CBN fantaserye could not help but look behind them to observe the colorful sea creatures and to watch a diver that went into the tank to clean up the aquarium. For most of them, it was their first time to visit the Manila Ocean Park.

According to Dyosa director Wenn Deramas, they chose the marine themed park as their press con venue to promote ecological awareness among people. It also fit the theme of the new TV show, which will feature lead star Anne Curtis as a mermaid when she transforms into Dyosa Agua. Her two other personas, Dyosa Tierra and Dyosa Cielo, will transform her into a centaur and a bird, respectively. As a goddess, Anne's character can control the elements and the animals in the earth, sea, and sky.

Sam Milby will also have a scene wherein he is shirtless and will be wearing shorts. He exclaimed: "Nakahubo rin ako!" Direk Wenn described Sam's scene as similar to the one shot in Terminator wherein a nude Arnold Schwarzenegger emerges on earth after traveling from the future.

It takes around two to four hours to put on the prosthetics of Anne, Sam, and Luis. The bird character of Anne takes longest to create since they have to put extensions in her hair and she has to put on the heavy wings.

In Dyosa, Anne plays the role of Josephine, the daughter of Bernardo Carpio (Matthew Mendoza) and Sinukuan (Mickey Ferriols). Her simple life becomes altered when she turns 18 years old. She learns that midgets Huling ang Miong (played by Rubirubi and Jojit Lorenzo, respectively) are her adoptive parents who are loyal followers of Sinukuan.

As the takda (or destined one), Dyosa is supposed to be the next queen who will bring balance to the opposing worlds of good (Kabanwa) and evil (Kasamyan). However, the young girl is reluctant to become the next queen of the immortal gods especially since she is infatuated with a mortal comics illustrator named Mars (Zanjoe Marudo).

Josephine also has a childhood friend named Kulas (Luis Manzano) who is secretly in love with her. Adonis (Sam Milby) is a beast tasked to kill Dyosa but when he lays eyes on her, he becomes mesmerized by her beauty.

Adding conflict to the story is Magayon (Jaclyn Jose), who is very jealous of her sister Sinukuan. Magayon wants her daughter Diana (Nikki Bacolod) to be the destined one instead of Dyosa.


Amang Suga (Lloyd Samartino) is the father of Sinukuan and Magayon. He is the most powerful god in Kabanwa while Tadaklan (Carlos Morales) is the king of Kasamyan, the land of the engkantos.


Other interesting characters to look forward to include the talking mirror Salaminsim (Vice Ganda), the half-man, half-goat Bakos (Epi Quizon), and Venus (Joseph Andre Garcia), the younger brother of Josephine.

Hardbound coffee-table books containing artwork and photography by Jojit Lorenzo were given away for members of the media who attended the press con at the Manila Ocean Park.