20 signs you're a certified #JaDine fan

Test your dedication to the James Reid and Nadine Lustre fandom by checking this list of signs indicating that you're a certified #JaDine fan.

James Reid and Nadine Lustre's tandem is currently one of the most sought-after love teams in showbiz.

JaDine's (pronounced Jey-Din) onscreen chemistry transitioned from the big screen (remember Diary Ng Panget and Talk Back and You're Dead?) to our very own TV sets.

Fans embraced their characters Clark and Leah (#CLeah) in ABS-CBN's successful primetime hit On The Wings Of Love. This was followed by a concert at the Araneta Coliseum where they officially announced that they're a couple. They now topbill a movie titled This Time under Viva Films.

For two years, James and Nadine have been giving us ~*kilig overload*~ from their sweetness which turned from reel to real! And we still can't get enough of this lovely couple!

We've listed 20 tell-tale signs that you're a certified JaDine fan. Check them out below:

1. You constantly check the hashtag #Jadine and often use it in your social media accounts. You also actively participate every time there are JaDine-related hashtags on Twitter.

2. You almost died of kilig upon hearing James Reid declare his love for Nadine during their Araneta concert. This is one of your wishes in life and you thank God for making this come true.

4. At one point in your life, you came up with your own JaDine fan art. May it be a photo collage or a pencil drawing, this is your way of expressing your love for James and Nadine!

5. You know all Jadine songs by heart. "Bahala Na" never gets old and it's always part of your playlist! You even have them offline on your music streaming app for easy access! Plus, you bought at least one of their albums!

6. You never missed an episode of On The Wings Of Love. At one point, you got angry with Jigs (Albie Casiño) and Simon (Paolo Avelino) for getting in the way on JaDine's love story on the show. And even though the show has finished airing, you still binge-watch it online.

7. This scene gets you drooling EVERY TIME! Not everyone eats pan de sal like that!

8. "OJD!" is one of your favorite expressions! OJD stands for "Obsessive JaDine Disorder."

10. Diary Ng Panget holds a special place in your heart. DNP is their first movie together that sparked your JaDine fandom. Then, you watched all of their other movies including Talk Back And You're Dead (2014), Para Sa Hopeless Romatic (2015), Beauty and the Bestie (2015) and their newest movie This Time.

11. You actively participate in polls where JaDine is nominated...including The PEP List! James received two trophies during last year's PEP List Awards Night: Male Star of the Night and Breakout Star for 2015. Nadine was there to support her hubby!

12. Your nickname for James is Hayme while you call Nadine as Naddie/Nadz. Only Hayme can call Naddie "Mine."

13. You know the terms "oxyjames," "nadinehaler," and "jadinebulizer." You need these every time you get kilig overload from James and Nadine's on-and-off cam sweet moments.

14. You have all the magazines and books that featured JaDine. These include YES! Magazine's special collector's issue last February 2016 and BJ Pascual's book where Nadine was the cover. You can't wait for their upcoming tell-all book!

Here's the second cover of #YESFebruary2016 issue! #JaDineInYES #MostApprovedIssue YES! Magazine celebrates the month of hearts with one of today’s most romance-inspiring love teams: James Reid and Nadine Lustre, also known as JaDine. In the more than 160 photos of James and Nadine that grace the February 2016 issue—including fun and fashionable shots from the magazine’s exclusive photo shoot—fans and curious observers will surely find something that will make their hearts melt. They will also get to know, through the exclusive interviews with YES!, how James and Nadine have evolved in front of and behind the camera. James, for instance, recalls that he didn’t imagine a showbiz future for himself when he was in his early teens: “I just imagined myself getting into a nine-to-five job every day, sitting at a desk, and then saving up to go on a holiday once a year, and going grocery shopping… Now, I’ve completely transformed. The 13-year-old me, or the 15-year-old me, would be terrified. ‘Oh, my God, so many people.’ I’d be like, ‘How do you do it, all the pressure and everything?’” Nadine, for her part, reveals how she felt on premiere night while watching Diary ng Panget, her first teamup with James: “Tumitingin talaga ako, as in everywhere, even sa likod, tinitingnan ko po silang lahat. So, parang ako, ‘What’s my purpose?’ Parang naisip ko na ’yon, e, siguro ito ’yong purpose ko—to make everyone happy, to make people carry a smile, to make everyone laugh.” The issue also includes the lovable characters and the kilig moments of the hit TV series #OntheWingsofLove (#OTWOL), which stars James and Nadine. Find out how the charming love-team partners are behind the scenes, what they think of the OTWOL characters, and what’s their idea of a perfect ending. Also in this issue, find out what goes on inside the mind of the woman who is confidently beautiful with a heart: Miss Universe 2015 Pia Alonzo Wurtzbach. She speaks of her struggles before she finally got the crown and saw her dreams turn into reality. Grab your copies now!

15. Every 15th of the month is JaDine Day. James and Nadine's characters in Diary Ng Panget The Movie, Cross and Eya, are born on the 15th which is probably why fans chose this day as the official JaDine Day! 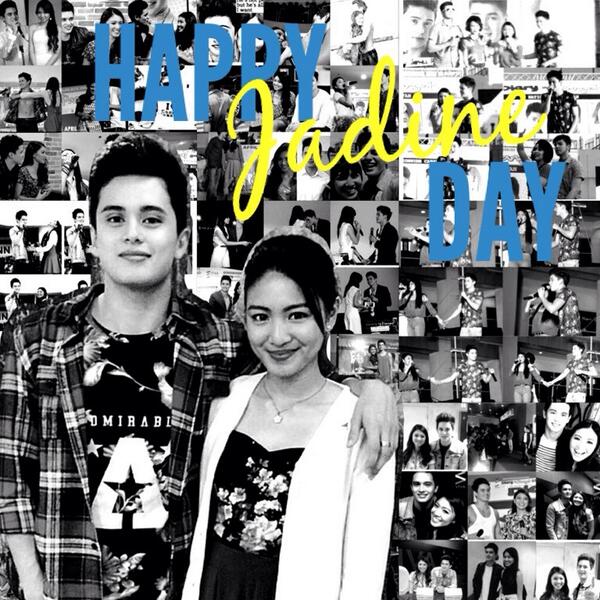 16. You know important dates in their lives. You religiously greet James on his birthday every May 11 and anticipate seeing Nadz at her Halloween-themed birthday party every October 31.

17. You even celebrate their monthsary every 11th day of the month!

18. You support all of their product endorsements. You know what to do with your P20!

19. You’re probably a member of one of their fan clubs! We Love Jadine, Kehrbears, or Naddicts unite!

20. You witnessed how they grew up from their totoy and nene days. James won Pinoy Big Brother Teen Edition 2010 while Nadine was once part of a girl group under Viva called Pop Girls before they became the power couple that they are now.

PEPsters, how many did you cross out from our list? If you get more than 10, then you're a certified #JaDine fan!