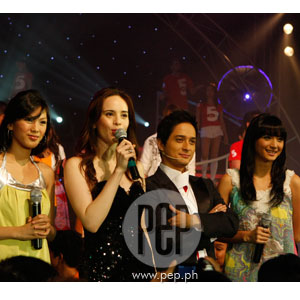 (From left) TV5's Juicy's Alex Gonzaga, Shall We Dance's Lucy Torres-Gomez, Talentadong Pinoy's Ryan Agoncillo and MysMatch's Iya Villania are some of the stars who will bolster the station's chances of competing against the two local network giants.

Those words perfectly capture the new look of ABC-5 as it alters its name to TV5-boldly indicating the network's desire to reinvent itself and garner a bigger share of the market.

Two days after the grand press launch held last Thursday, August 7, at the C3 Events Place in Greenhills, San Juan, TV5 publicly introduced its new set of programs via a television special titled I-Shake Mo TV Mo. The boob tube spectacle was taped at the SMX Convention Center of the SM Mall of Asia in Pasay City and was aired earlier today, August 9, at exactly 7 p.m.

Hosting the event were Ryan Agoncillo of Talentadong Pinoy and Alex Gonzaga of the TV5 entertainment talk show program Juicy. The young and dynamic team of TV5 and their executives, led by head honcho Tonyboy Cojuangco, were all present to partake in the celebration.

I-Shake Mo TV Mo provided a sneak peek of the network's 30 new shows that are all set to premiere this week.

The stars came in full force to introduce and talk about their respective shows. Mirroring the newly repositioned network's image, the occasion adopted a variety show format complete with games, dance and song numbers and band performances by Sugarfree and Bamboo.

Regine Tolentino's dance number together with the UP Pep Squad drew ooh's and aah's from everyone inside the venue while Lucy Torres-Gomez's Shall We Dance number wrapped up the evening's presentation.

SHAKING THE STATUS QUO. TV5's overhaul was made possible after the Tonyboy Cojuangco-owned network entered into a long-term block airtime agreement with MPB Primedia, Inc.—a local group backed up by a Malaysian media organization.

The tie-up allowed ABC-5 to boost its programming, which consequently bolstered the network's chances to compete against established network giants, GMA-7 and ABS-CBN.

According to Chief Executive Officer Christopher Sy, the slogan, "Shake Mo, TV Mo," mirrors the network's objective of radically altering the public's boxed viewing habits. The young network executive shared that they're here to offer alternative programs to cater to the needs of those who are looking for something different aside from the usual flavor offered especially on the primetime slot.

According to Mr. Sy, ABC-5 is still handling the engineering side but Prime Media will be providing the content of the TV station. Pat Marcelo-Magbanua is now in charge of media relations for TV5 but Terra Daffon is still with corporate affairs of ABC-5.

Before becoming the CEO of TV5, Mr. Sy used to work with EMI Philippines as the managing director. He also worked previously as the general manager of United International Pictures in the Philippines.

In the question and answer portion of the TV5 press launch, Mr. Sy allayed fears that the TV station might be influenced by Malaysian investors. He explained, "ABC-5 is still owned by Tonyboy Cojuangco. Prime Media has simply entered into a block airtime agreement but we do not have any equity in this station."

The primetime block of rival networks ABS-CBN and GMA-7 are filled with telenovelas but TV5 promises to deliver varied shows that veer away from this genre. Why are they doing this risky move?

"We want to give people an alternative. If we offer people another teleserye, pareho lang kami sa Channel 2 and Channel 7. I think they are serving their market very well but we just want to want to provide an alternative for people who might not want to watch a teleserye on primetime."

Starting tonight, August 9, TV5 now airs 24-hour programming using its brand new 120kw transmitter that cost US2.6 million (about P117 million). This allows TV5 to be picked up in areas as far as San Jose, Cabanatuan in the north.

With reports from Jocelyn Dimaculangan