Jayann, Gretchen and Ram to compete for "Pinoy Idol" title 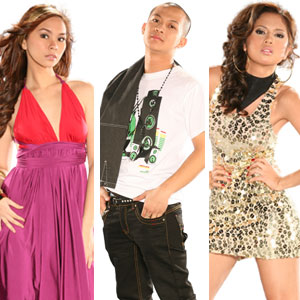 (From left) Gretchen Espina, Ram Chaves, and Jayann Bautista will compete for the Pinoy Idol title during the grand finals on August 17, 2008.


Emotions ran high at the Pinoy Idol stage last weekend when two of the five remaining hopefuls were taken out of the reality singing competition. During the double eliminations held Sunday, August 10, resident balladeer Daryl Celis and R&B singer Kid Camaya were booted out of the competition.

It was indeed a tough night for the remaining Idol hopefuls as each was tasked to choose and render his or her own arrangement to a song worthy of the "Greatest Idol Performance." Unlike past gala nights wherein industry professionals mentored the finalists, there was no vocal coach present to tutor them. Instead, the Top 5 were left to interpret their song choices on their own and were later evaluated by judges Ogie Alcasid, Jolina Magdangal, and Wyngard Tracy.

For 21-year old Daryl Celis, his Idol surprise involved an emotional phone conversation with his Macau-based dad and an equally touching webcam chat with his mom from Japan. During his Greatest Idol Performance, Daryl chose to interpret the classic ballad, "The Promise."

"It wasn't perfect," Ogie agreed. However, he observed an improvement in Daryl's performance. "You know what I was feeling when I was watching you? I was extremely proud of you. We've seen you grow, and I think there's so much more that you're gonna offer. I really like to see you tomorrow and be part of the final three," he added.

It was a unanimous decision for the judges, as Wyngard also shared the same opinion. "Sa akin Daryl, the past performances mo, pwedeng-puwede kang to qualify sa top three. Keep it up."

Twenty-year-old Gretchen Espina sang "I'm Here," a song popularized by American Idol Season 3 winner Fantasia Barrino. Gretchen's surprise had been a mini-celebration with her cousins and fellow members from the UP Singing Ambassadors. She also had a surprise phone conversation with her UPSA mentor.

As for her performance, Gretchen only did moderately—no big praises from the judges this time.

"I have to be honest," Ogie started. "In the beginning of the song, I could not really understand what you were singing. Medyo mahina yung boses mo. I felt that it was low for you," he explained. "Sayang yung progress mo for the past few weeks. You were really, really doing well. Maybe today, you were very emotional. But you have to control that emotion to be able to perform well," advised Ogie.

In Wyngard's opinion, she made a wrong song choice. "I don't think the song was really meant for you. You should've chosen a simpler [one]," he added. "Kaya lang yung song na yan, talagang tumatatak si Fantasia. You couldn't help sometimes to compare. Hindi mo talaga na-perform well yung song. Next time, you be careful in choosing your song."

Jolina agreed with her fellow judges and added, "I think you're very beautiful tonight."

Twenty-four-year-old Kid Camaya chose to interpret an ‘80s classic, "Careless Whisper." His Idol surprise involved a celebration with his half-brothers and sisters as well as his relatives from Pampanga.

"Actually, natakot ako sa choice of song mo, e," admitted Ogie. "It didn't seem to be a song that was pang final. Pero, wow! You really did it tonight. Congratulations."

Twenty-one-year-old Jayann Bautista sang Fergie's "Finally," a song she admitted to be her theme song. Jayann's Idol surprise was a meeting with her high school best friend from Pampanga who shares the same first name as her other best friend, ABS-CBN's ASAP ‘08 mainstay Rachel Ann Go.

After her emotional performance, Ogie pointed out that Jayann had been flat at the beginning but complimented her improvement as the song went on. "Maybe it was nerves. Pero habang umaandar ka, parang diesel ka. Medyo umiinit, medyo nakukuha mo na yung tono. You know, it's interesting for me to hear you sing a song so plainly. And you know, that was good," he remarked.

The last to perform was 25-year-old Ram Chaves who sang Francis Magalona's "Bahay Yugyugan." His Idol surprise involved a jam session with his Cagayan de Oro-based bandmates from Sutil and a phone conversation with his mom from the U.S.

For the judges, Ram's performance had been nothing out of the ordinary.

"You have this uncanny ability to get people going with your energy," observed Ogie. "That was really a solid performance. That was really good. However, I think ang hinahanap ni Wyngard is because we know you can do so much more than that. It's too easy for you," he added. "We want to hear something soulful I suppose...from your heart. Something that you'll sing from your heart and really get us emotional and gooey all over when we hear you."

Jolina agreed with her fellow judges and pointed out that maybe they were anticipating a "slow song na rock." But still, "medyo expected ‘to," she said of Ram's performance.

Pinoy Idol host Raymond Gutierrez asked the judges during the eliminations the following night whom they would choose to be part of the final three. The three judges named Ram, Jayann, and Kid as those deserving to be in the Top 3.

However, when the nationwide votes were finally tallied, it turned out that Gretchen is still in the running while Kid Camaya and Daryl Celis were both out of the competition.

Next week, the Final Three composed of Ram Chaves, Gretchen Espina and Jayann Bautista will go head-to-head as they move on to compete for the Pinoy Idol title.

Watch the Pinoy Idol Finals on Saturday after Pinoy Records and on Sunday after Kap's Amazing Stories only on GMA-7.