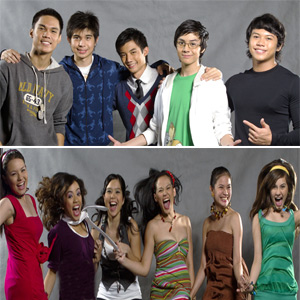 Mikee Lee argues that although Lipgloss tackles the lifestyles of wealthy (and wannabe wealthy) teens, it still has the chance to hit their target market. He says, "Maybe it's about time to let the people relate na parang, ‘Paano kaya kung ako ang nandiyan?'"

It's been a while since the youth-oriented drama series dominated the Saturday afternoon slot of TV networks.

After the success of T.G.I.S. and Gimik, Saturday afternoon viewing has been dominated by showbiz talk shows and public affairs program. Now, armed with its aim to offer an alternative, TV5 brings back the teen drama for the youth on weekends.

Starting August 16, the younger audience will have an option to watch a program that they can relate to in Lipgloss. Unlike former teen shows, however, TV5 promises that Lipgloss is not the usual "boy-meets girl" theme. Instead it will portray the real issues of the youth today.

The show is about the "glossy" teen students of Linden High who go through a lot of experiences in their relationships, misfortunes, and heartbreaks. Through an anonymous blogger, the viewer will be able to look at the secrets of these glamorous young people. As the story of these privileged kids continues, after a good dose of guilty pleasures, one realizes that a lot of hypocrisy and misery is begotten by wealth.

Although the program tackles the lifestyles of the wealthy (or wannabe wealthy) teens, Mikee Lee, one of the young actors of Lipgloss, believes that they can still hit the "masa" by offering them something different.

"I think 'yong show has a great promise despite na may kasabay 'yong slot, may show that will cater to the lower market," Mikee says.

He adds, "If you're gonna target an audience, it's also good to lure them into something that they have not seen, that they are not familiar with. So, if you let them watch something about the elite maybe they can get intrigued about it kasi most of the time they watch TV shows about the middle class that usually cater to everyone. Maybe it's about time to let the people relate na parang, ‘Paano kaya kung ako ang nandiyan?'"

Lipgloss is directed by Chris Pablo and Aleah Aliporo Eugenio.

Don't miss the start of the sleek and glossy youth drama every Saturday starting August 16 at 5:00 p.m. on TV5.