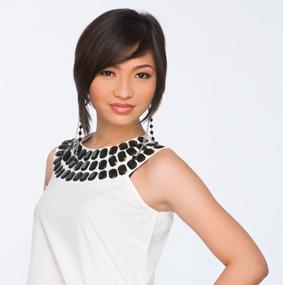 Bunny Malunda (in photo) was eliminated in the August 16 episode, when Lani Misalucha sat as one of the guest judges in Pinoy Dream Academy Season 2.

Among the scholars who have been placed on probation, Bunny Malunda and Hansen "Sen" Nichols are probably the most equally-matched. Both Bunny and Sen have never been up for the vote on a Gala Night, although they have been part of the bottom four group. Their best grades were from group performances.


And, perhaps most importantly, they are popular among viewers—but not always because of their singing. Sen's performances rarely impress the judges, but he is famous in online message boards and forums for his closeness with fellow scholar Cris Pastor and, oddly enough, Van Pojas. On the other hand, Bunny was always under the radar until she caught the ire of many viewers when the mentors saved her from probation during the 7th Gala Night.

So, Bunny and Sen's showdown during the 9th Gala Night of Pinoy Dream Academy Season 2 was not only a battle of singing prowess; it will prove which mini-controversy has propelled the viewing public to vote. It was also apt that the scholars had a counterpointing challenge last night, August 16, at the PDA Concert Hall in Quezon City. For the counterpointing challenge, two scholars had to sing their songs at the same time.

In the end, it was Sen who gained the sympathy of the viewers, receiving 60.35 percent of the total text votes. Before she left, Bunny received warm comments from this week's judges—composed of resident jurors Louie Ocampo, Gerard Salonga, and guest judge Lani Misalucha—for her rendition of Ogie Alcasid's "Wag Ka Lang Mawawala."

"Yung feeling ko sa'yo magaling ka singer kaso nagiging hadlang sa'yo... yung physical part.," Gerard said, referring to Bunny's cyst on her throat. According to the judges, Sen's counterpointing on his song "Say That You Love Me" was good, but his solo part was average. Gerard also noted how Sen excels during group performances but remains weak on solo numbers. "You need to make your singing your strongest suit," he said.

This week's Gala Night also showcased some surprising developments in the competition. For one, this marks the second consecutive week Liezel Garcia failed to get into the top three. Counterpointing "Sometimes a Love Goes Wrong" with Miguel Mendoza's "Stay Awake" proved to be a challenge for the former consistent top scholar. Louie said Liezel's performance was safe but great, although he enjoyed Miguel's performance more. Gerard said the two did not have enough interaction, while Lani said Liezel needs to let loose.

Honorary Scholar Poy Palma once again managed to outperform some of the regular scholars with her rendition of Sarah Geronimo's "Forever's Not Enough." She got one of the top three scores of night, although Louie and Lani noticed she was not confident with her high notes. Nonetheless, the judges agreed Poy "sounded really good."

Which begs the question: why was she not included as a regular scholar? Poy counterpointed with Van, who sang "Maybe." According to Louie, Van's performance was "okay" but "nothing really, really fantastic." Gerard was more specific with his critique. ‘Right now kasi, andito ka sa point na artista na okay kumanta instead of singer na mukhang artista. You have to become the singer... The singing has to come first," he said.

"Last week, you were one of my favorites... but today, parang you should work harder when it comes to singing ballad. This proves that if you want to last here, you have to cover all your bases," Louie said of Iñaki's performance. Although he said Inyaki was performing, Louie added he should still work harder. Lani, on the other hand, said the two can still do better.

Saving the best for last, Bugoy Bogayan and Laarni Losala's "Back at One" and "On the Wings of Love," respectively, was probably the night's most successful performance. Both of them are among this week's top three scholars, with Laarni named as Star Scholar. Receiving a grade of 8.97, this makes Laarni only the third scholar to get the top distinction for an individually-graded performance (Sen and Van, together with Bugoy, were named Star Scholars for their trio performance during the 6th Gala Night). While not among the top grades this season (Cris' third placer grade last week was higher), Laarni's 8.97 is among her highest solo performance grade.

Meanwhile, Sen (6.30), Miguel (7.50), and the duo of Cris (7.43) and Inyaki (7.27) received the lowest grades this week. This is Sen's second consecutive bottom four appearance, while Miguel has never been out of the bottom four since the Headmaster's List of Ten was introduced. The mentors saved Sen from probation despite getting the lowest grade this week. Curiously, this leaves two of the lowest-ranking scholars on the potential list of probationary scholars. While Miguel managed to give commendable performances during the 1st and 6th Gala Night, Iñaki has never been named as one of the top three scholars for any given week and Cris has been in the bottom group several times.

The remaining performances of the scholars will prove to be their most important yet as the finale of PinoyDreamAcademy Season 2 draws closer. Can Laarni keep up with the consistent Bugoy? Can Poy finally clinch the top spot after being the bridesmaid for at least two consecutive times? Who among Cris, Inyaki, and Miguel will be named probationary scholars this week?