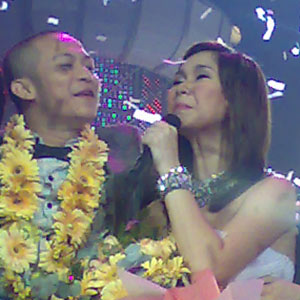 Jayann Bautista (not in photo), Ram Chaves, and Gretchen Espina competed against each other in the GMA-7 and Fremantle Media's Pinoy Idol. In the end, Gretchen of Biliran, Eastern Visayas was hailed as the winner of the reality singing competition.

The last and final showdown of the reality singing competition Pinoy Idol took place with a bang as the remaining three contestants Jayann Bautista, Ram Chaves, and Gretchen Espina battled it out on stage amidst energetic performances from legendary icons of the local music industry.


After the nationwide vote, 20-year-old Gretchen won the title Sunday, August 17, at the SM Mall of Asia—bringing home a prize package worth 5.7 million pesos—the biggest prize package in any local singing competition. Her prizes include a one million-peso cash prize, a recording contract, a management contract, a brand new car, and a condo unit worth 2.2 million pesos.


Before the actual showdown last Saturday, the Top 3 had a glorious homecoming in their respective home provinces in order to give their townmates a taste of what they show on the Idol stage.


21-year-old Jayann Bautista went back to her home province in Pampaga; 20-year-old Gretchen Espina revisited her Eastern Visayan roots in Biliran; and 25-year-old Ram Chaves paid a visit to his hometown in Cagayan de Oro. The Idol finalists were warmly welcomed, as shown by the massive audiences present during their respective visits.


For the final and ultimate showdown held Saturday, the Top 3 performed a total of three songs: a judge's choice, a mentor's choice, and a personal song choice. Unlike past Idol performances, the comments from the judges had to wait until the end of the show this time before they were shared onstage.


The first set of songs was picked especially for the Top 3 by Pinoy Idol judges Ogie Alcasid, Jolina Magdangal, and Wyngard Tracy. Wyngard chose "I'll Never Love This Way Again" for the soul singer Jayann; Jolina picked "For Your Eyes Only" for the powerful singer Gretchen; and Ogie chose "Bridge Over Troubled Water" for the resident rocker Ram Chaves.


The second round saw a set of songs picked by their favorite mentors. For Jayann—whose favorite Idol mentor was Regine Velasquez—the song "You'll Never Walk Alone" was especially chosen for her by the Songbird. Gretchen and Ram, on the other hand, chose Jaya as a mentor. The Queen of Soul picked a Destiny's Child belter "Stand Up For Love" for Gretchen and Aerosmith's "I Don't Wanna Miss A Thing" fit for Ram's rocker edge.


The last round of performances was attributed to the personal song choices of the Idol finalists. Gretchen gave a powerful interpretation of the Basil Valdez classic "Ngayon"; Ram rendered a rock-inspired take on Florante's "Handog"; and Jayann performed Tina Tuner's "Proud Mary" - a song that showed her versatility as a singer and performer.


After the breathtaking performances, the time was finally ripe to hear what the judges had to say.


Wyngard shared Jayann's comments in behalf of his fellow judges. "Actually kanina si Ogie, gandang-ganda siya sayo," he revealed. "And Jolina naman finds your voice very powerful," he added. "Sa akin, you would start the first two songs na flat ka. I guess you are very nervous or uneasy, pero bumabawi ka sa huli. Now with this ‘Proud Mary,' you proved that you're not just a very good singer, you're also a performer," he told Jayann.


Lastly, Ogie shared the judging panel's view on Gretchen's three performances. "First yung comment ni Jolina about you. Sabi niya, you have a different aura tonight. Talagang yung performance level mo daw mataas. May it factor ka daw. You had oomph," he shared. "Sabi ni Wyngard, tonight, you were a revelation," he added.


As for his own comment, he told Gretchen, "It's been a week na medyo I was quite disappointed with your performance, because I felt that you were always emotional. [But] I have to say that tonight, you really sang like a champion, especially in the song ‘Stand Up For Love'. You have proven to all of us here na talagang karapat-dapat kang nandiyan. Wala na yung takot. You were so confident."


The Saturday show also saw high-caliber performances of the Top 3 finalists with the UP Manila Chorale as well as with previously eliminated finalists and, of course, with past Idol mentors Regine Velasquez and Basil Valdez. Celebrated Pinoy bands like Freestyle, South Border, Cueshe, and Itchyworms also performed on the Idol stage

THE GRAND FINALE. The Grand Finals held Sunday at the SM Mall of Asia saw stunning performances not only from the Top 3, but also from the rest of Pinoy Idol's Top 24.


For the opening Idol performance, the 21 previously eliminated contestants were grouped into five—one group sang alongside balladeer Haji Alejandro; another with sultry diva Vernie Varga; yet another with crooner Luke Mejares; one group performed with Jett Pangan of The Dawn; and lastly another group with R&B rising star Duncan Ramos. OPM bands like Pupil, Rivermaya, and Callalily also performed onstage.


Minutes after the first few performances, the Top 3 huddled onstage in anticipation of the first eliminations. In gray-and-silver ensembles, Gretchen, Ram, and Jayann stood close while waiting for host Raymond Gutierrez to announce who among them will leave the show. Finally, after a short pause, 25-year-old rocker Ram Chaves' name was called out.


Now, it was a one-on-one battle between Gretchen and Jayann. For the final song, the two girls performed their own interpretations of the official Pinoy Idol song titled "To You" composed by judge Ogie Alcasid and arranged by Pinoy Idol's musical director Danny Tan. As they rendered emotions to the song, both girls looked exceptionally regal in white gowns tailor-made by local designer Pepsi Herrera.


During the show, Ogie revealed that the song he composed is an inspirational piece dedicated to his own parents.


After the twin performances, excitement instantly filled the Idol stage as the judges, audiences, and finalists waited for host Raymond to announce the winner. Finally, with a suspenseful tone, Raymond announced that it was indeed the pride of Eastern Visayas—the 20-year-old Gretchen Espina—who won the title.

GRETCHEN, THE FIRST PINOY IDOL. In an interview with the entertainment press after the show, Gretchen admitted that she had not undergone any music lessons all her life, except for the vocal training she acquired from being a member of the UP Singing Ambassadors.


Before joining the Idol competition, Gretchen was a graduating student at the University of the Philippines-Diliman, taking up a BA European Languages degree. She stopped studying in favor of the opportunity to become the first Pinoy Idol.


PEP (Philippine Entertainment Portal) took the opportunity to ask Gretchen what other languages she can speak, given that she was a language major in UP. "Latin and Spanish," she replied.


In the same interview, Gretchen shared that aside from recording her own album and singing, she still has no immediate plans as of now. However, she revealed that, along with her fellow Top 3 contenders Ram and Jayann, they made a pact saying that whoever wins the title shall give each of the two runners-up P100,000.


She also revealed that she has no plans to join politics in the near future. Unknown to some, Gretchen is the only daughter of a provincial governor and is the youngest in a brood of three. A member of a political and influential family, the 20-year-old champion even auditioned for the reality singing competitionwith a bodyguard in tow.


JAYANN, THE PRIDE OF PAMPANGA. Jayann Bautista shared that despite not winning the elusive Pinoy Idol title, this is certainly not the end of her musical journey.


Jayann admitted to the entertainment press that she felt bad after the announcement of the winner because she wanted to win the title. When asked why she had puffy eyes after the show, she replied, "Syempre, naiyak naman ako. Gusto ko rin maging Pinoy Idol." She also said that another reason for her shedding of tears was her mother. "I saw my mom kasi crying. So naiyak na ako kasi mom ko yung talagang sumusuporta sa akin since nagstart ako."


Has she gone to accept the turnout of the votes? "It will take time siguro," she shared.


Jayann was asked why she looked "tensionada" during the finals. "Parang, it's so close, yet so far," she answered, referring to her near-Idol win. "Ito na yun, e," she continued. "Parang close enough for you to taste, but you just can't touch."


PEP asked Jayann who she thinks between herself and Gretchen is the better singer. "I know I am," she replied. "I believe I am."


What was her reaction to the many supporters rooting for her in the audience?


RAM, THE ROCKER OF CAGAYAN DE ORO. Like Jayann, Ram Chaves is determined to continue what he has started in Pinoy Idol.


PEP asked Ram if his immediate plans include his bandmates from Sutil. "I wanna use the same band that I have," he replied. "[But ]I'm not quite sure [kung gagamitin yung name na Sutil] because mas sikat yung Ram Chaves ngayon. It's gonna be probably Ram Chaves or Ram Chaves band, something like that," he shared.


With his reply to this question not to mention his constant mention of God in his interviews, PEP asked Ram whether he believes he is a religious man. "Yes, I am," he replied with conviction. "I am a member of Days with the Lord in Ateneo de Cagayan. Kasali ako sa group na yun," he shared. "I'm not a saint, though," he immediately interjected. "But I'm God-fearing."

Was he disappointed? "No," he said, stating that being in the Top 3 was too much blessing for him. "Pero nang-hinayang ako sa 5.7 million. I wanted that, but I think this is a good start naman na magka-career and makapag-ipon ng 5.7 million," he added.


Pinoy Idol debuted on April 5 of this year and was aired Saturday and Sunday nights on GMA-7.