Bea, Christian, and Apple talk about experiences in PDA Season 2 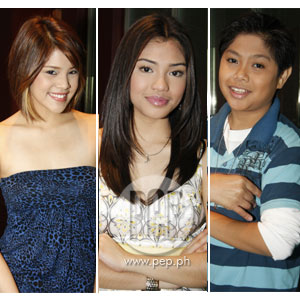 
One thing that Beatriz Muñoz, Christian Alvear, and Apple Abarquez—the expelled scholars of Pinoy Dream Academy Season 2—have in common is that a lot of intrigues have been thrown at them while they were still inside the Academy. Now that they are back in the real world, they are more than ready to carry on with their dreams.

THE SWEET CHANTEUSE. Beatriz Muñoz easily got the attention of PDA viewers because of her strong personality. Some think that the Alabang girl is opinionated and pro-active while others think she's bossy and snobbish. This wrong judgment might have been a product of her misunderstandings with Laarni during their first few weeks inside the Academy.


What does she have to say about this? "I am misjudged to be unfriendly because of the way I look but I'm really friendly. I am used to dealing with people from all walks of life and I am not the type who judges people based on where they come from," was Bea's answer.


What about the misunderstanding she had with Laarni? "It was a matter of adjusting. I must admit that it wasn't easy to get used to her but I can honestly say that I like her for who she is. It just took a while for me to adjust but when I finally did, it was easier to reach out," Bea said matter-of-factly. She also added that from the very start, she has utmost respect for Laarni and her talent.


What's the status of her relationship with Miguel?

"Miguel and I are in an open relationship, which means that we have each other for support. What we have is both romantic and platonic because we acknowledge the fact that we can't commit full time because we still have dreams to chase," she remarked.


SMALL BOY WONDER. Christian, on the other hand, left quite an impression on the viewers because of the big talent residing in his small stature. Besides proving himself, the 25-year old Hero Channel dubber also had to cope with several issues inside the Academy. One of these is the consecutive dropouts of his two closest friends, Ross and Jet.

How did he feel when Ross and Jet left?

"I was really scared at first because everybody had a group inside the Academy. I instantly clicked with Ross and Jet because we're the oldest Scholars so when they decided to drop out, I found myself alone. I was hesitant to hang out with the other Scholars because I was so afraid that they'd find it intrusive but they were the ones who welcomed me open arms. I was sad that my two closest friends left the Academy but the other Scholars made it easier for me," was his long answer.


Christian was also one of the Scholars who had a fight with Laarni. The two had a misunderstanding while preparing for an assignment for Direk Joey Reyes.


How did he settle the problem with Laarni?

"I'm never the type to keep grudges. After our misunderstanding, I reached out to Laarni and we actually got really close. She became one of my best friends inside the Academy and while I was still there, I confided in her," he said.


THE DIFFERENT COUPLE'S DAUGHTER. Among the three, Apple is the one has the most intrigues thrown at her. The 19-year old Cebuana proved that she can be friends with everybody but some questioned her intentions, especially for Miguel.


What does she have to say to the people who think she is trying to steal Miguel from Bea?

"Miguel and I are just friends and Bea is my Scholar best friend. The three of us have always been the tight and after Bea left, Miguel and I just carried on with the friendship that we have," she remarked.


Did she get the chance to talk things out with Bea?

"Actually, I was with Bea and her family the day after I was expelled. For us, there's nothing to talk about because we know the real score. Miguel and I are just friends and Bea knows that," she said.


How about the baby talk that some viewers find irritating?

"I baby talk because Mommy Bunny finds it funny. She misses Daddy Chivas and Jether so much and whenever I baby talk, she gets amused and temporarily forgets about her longing for her family. I just wanted to help Mommy Bunny deal with being away from her family," she stated.


Bea, Christian, and Apple all have what it takes to make it big in the local music industry. Aside from the fact that they are very talented, they also have lessons from the Dream Mentors to boot. They know that intrigues are part of world they are trying to penetrate and they are prepared to face them as they continue soaring higher towards their dreams.