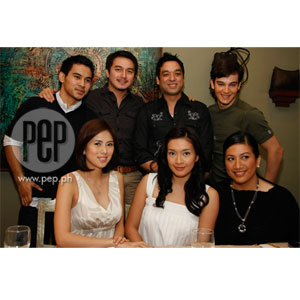 The stars who will give life to Hush Hush are (from left, standing) Joem Bascon, Dominic Ochoa, Bernard Palanca, and Bruno Folster. They also include (from left, sitting down) Krista Ranillo, Inah Feleo, and Ana Feleo, the sister of Inah. Valeen Montenegro (not in photo) is also part of this drama series that will be shown every Wednesday night starting August 20 at 7 p.m. on TV5.


Do you want to know how life is in show business?

TV5 offers to televiewers its new drama series Hush Hush, which will take them to the world of celebrities and showbiz personalities every Wednesday night.

With the help of the famous directors like Jay Abello (2008 Cinemalaya best cinematography winner for Brutus), Jade Castro (critically-acclaimed director of Endo), and veteran director and award-winning director Laurice Guillen, the actors will be guided to properly portray the lives of showbiz personalities in general.

Initially called Doble Kara, the show's title was changed to Hush Hush to give it a juicier taste.

The story of Hush Hush follows the lives of young celebrities as they experience the ups and downs of the entertainment business. It will also feature how aspiring celebrities struggle to attain the dream of becoming famous, their battle with their detractors, and their attempts to survive in the industry.

GENERAL CHARACTERS. The creative team of Hush Hush took extra care to avoid the characters in the show from being identified with a certain celebrity.

Dominic plays the role of Gabby, a talk show host who has a say in the casting of the various shows in the network. This married guy is so influential that he can instantly give a job to Kate (played by Krista), with whom he is having an affair. Kate is a newbie celebrity who is a product of a reality show.

Bernard, on the other hand, is a young director in this series. He falls in love with a young actress named Roxy. Played by Valeen, Roxy is considered as the "IT" girl in showbiz who practically has everything.

The show also features the half-Brazilian, half-Italian model Bruno who plays that character of Jinno. He is a long-time actor who never got the chance to be noticed because of the lack of roles for someone who has an accent.

Jinno and the other celebrities in the story are under the Spotlight talent agency, which is owned by Vivian (played by Ana Feleo).

Joem is an aspiring celebrity named Andy who came from province. He will be paired with Inah Feleo who plays a kontrabida role as Sarah.