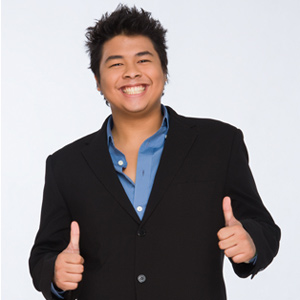 Iñaki Ting was eliminated during the August 23 episode of Pinoy Dream Academy Season 2. This also marked the end of Poy Palma's four-week stay inside the Academy as an honorary scholar.

Iñaki got 24.03 percent of the text votes, against Miguel's 75.97 percent. But it was undeniable that both scholars gave it their all during their duets with professional singers last night, August 23. Resident judge Louie Ocampo loved his "Proud Mary" with Bituin Escalante. "You're both pros on stage," he said. Meanwhile, resident judge Gerard Salonga was surprised with Miguel's performance of "Never Ever Say Goodbye" with Sheryl Regis. "It wasn't as bad as I was predicting. She didn't eat you alive on stage. You kept up with her."

But inclusion of the Faculty didn't stop Bugoy Bogayan from receiving the top score this week. He got a grade of 9.81 for his rendition of Gary Valenciano's "Muli" with Vina Morales. Gerard said Bugoy lacked the softness the song required during the start of the song. "Pero magaling ka talaga kumanta," Gerard said in the end of his critique. With that, Bugoy holds the highest score for both groups (9.82) and solo performances, beating Liezel Garcia's 9.67.

Dulce was just as kind to Liezel ("Tell Me" with Joey Generoso of Side A): "Mas maganda ang performance mo na ang kasabay mo ay professional artist. Hindi ka na yung parang natatakot and ang sarap pakinggan." However, the guest judge gave her shortest and warmest comment to Poy Palma ("Living in a Prayer" with the Ryan Cayabyab Singers). "You've got the fire," she said, "perfect." With last night's performance being her last, it was the fitting end to Poy's four-week stay in the competition.

Cris Pastor, who sang "Kissing A Fool" with Richard Poon, also managed to stage a rousing comeback after last week's performance. "I've never heard you sound this good," Gerard said, adding he was "blown away" by Cris' performance.

But the judges weren't as kind to Van Pojas and Sen Nichols, who got the lowest grades this week. Louie cited two issues with Sen's rendition of "Can We Just Stop and Talk a While" with Rachel Alejandro: intonation and diction. And while Louie said he enjoyed the performance, he got 7. 29, the lowest grade this week. Meanwhile, Van ("Bulong" with Kitchie Nadal) became conscious during the middle part of the performance. "If I were to rate, it was good but it could have been better," Louie said. Since there were only seven contestants remaining, only the bottom two scholars were named and were instantly placed on probation.