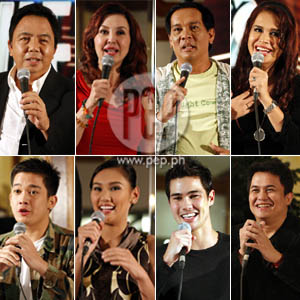 
Viewers can expect fun-filled nights once again on Saturday evenings as the much-anticipated second season of Celebrity Duets aired its pilot episode last weekend. Last Saturday, August 23, celebrities from different fields graced the concert stage and delivered spectacular duets with some of the country's esteemed music icons and singing superstars.

A fresh set of judges has also been selected to complement this new batch of contenders. Seated in the judges' panel this season are musical director, composer and arranger Danny Tan; stage and TV director Freddie Santos; and reigning Celebrity Duets champion Tessa Prieto-Valdes. Singers Ogie Alcasid and Regine Velasquez also reprise their roles as hosts.

After this exhilarating number, it was time for the eight celebrity contenders to show the judges their vocal prowess.

Beauty title-holder Carlene Aguilar was the first to perform with a karaoke favorite, Gloria Gaynor's "I Will Survive." For her duet, Carlene was paired with singer-actress Agot Isidro.

Tessa Prieto-Valdes seemed to have the same opinion. "This is the beginning, and you're like pa-buena mano," she observed. "I hope you last longer than the other beauty contestants that we had in season one."

On Direk Freddie Santos' turn to speak, Ogie jokingly asked him to "be kind."

Freddie obliged and gave Carlene a good comment. "You're very beautiful," he told the beauty queen. "Carlene, you can spell your name with a K. May karapatan ka diyan."

Next to perform was actor-comedian Joey Marquez, who considers singing one of his frustrations in life. For his celebrity duet, he chose Mike Francis' "Let Me In," singing with balladeer Nonoy Zuñiga.

As for Freddie Santos, "I'm speechless," he laughed. "I'm supposed kasi to comment on the presence, and the presence was present. 'Tsaka ang lamig ng boses mo...ang lamig talaga," he added.

Beauty and wellness guru Cory Quirino went next with Abba's "Dancing Queen." She chose this song, she said, because she believes she's more of a dancer than a singer. For her duet, she was paired with the sultry diva, Vernie Varga.

"I love it," smiled Tessa. "Because may dancers sa likod and everything," she exclaimed. She told Cory, "You just have to enjoy the show, and I can feel that you're enjoying."

Next to perform was half-British, half-Filipino football player Phil Younghusband. Phil, who played for the Philippine national team in the 2007 and 2008 South East Asian games, admitted that it's easier for him to play football in front of thousands of people, than to actually sing in front of ten. He was partnered with Aicelle Santos and chose the popular R&B chart-topper, "Umbrella."

"You have a distinct quality," observed Danny Tan pointed. "And it's good that you're singing current songs, which will really appeal to the young audiences," he added. "Just be conscious, because you can carry a tune definitely. And sustain."

"You're so cute!" exclaimed Tessa. "I can share my umbrella with you! But you have to remember, this is a duet, so you kind of have to interact with your partner a little bit. But you're just so cute. You can do no wrong," she teased.

Freddie Santos, however, went for hand movements to signify his comments. As he was citing his observations, he did some motions with his thumb, which slightly geared upward and downward as he gave one comment after another.

Finally, the formidable director remarked, "Not thumbs-up, not thumbs-down...thumbingi," he joked and pointed his thumb sideways. "But keep smiling," he added.

Beauty queen and actress Melanie Marquez said she wants to make people happy with her singing, and admitted her love for old songs. For her pilot performance, she chose a Whitney Houston classic, "Greatest Love of All," and sang it with R&B prince Jay-R.

After her performance, Tessa shared, "I love the costume," referring to Melanie's all-white ensemble. "Lend me your wig and the korona, ha? Share after," she joked.

Next was designer JC Buendia, who joined the competition to "unleash his inner geisha." Unknown to some, JC is the designer of Pres. Gloria Macapagal-Arroyo and is also a member of his church choir. JC chose Robert Palmer's "Simply Irresistible," which he sang with singer Randy Santiago.

"Basta JC, may kasamang damit ‘to, ha, after?" joked Tessa. But on a serious note, she said, "Alam mo, I know how hard it is to be there. First episode pa lang ‘to. Next time, hasa ka na. Don't be nervous!" she told the designer. "Galing. We're all here having fun. That's the key."

Celebrity chef JL Cang went next with his duet of Brownman Revival's "Ikaw Lang Ang Aking Mahal," with Freestyle's Jinky Vidal. According to the chef, he joined Celebrity Duets 2 so that his friends can see him sing on television.

"Parang I can feel myself," observed Tessa. "Sumayaw ka na lang, like me. Pero once in a while, mag-sing ka na rin."

Direk Freddie Santos opted to relate his comments to cooking. "Maybe a little undertime in the cooking. Another ten minutes at 350 degrees would have done it better. But otherwise, you're like comfort food. Enjoyable," he pointed out.

Last to perform was MMDA chairman Bayani Fernando, who considers singing an avenue to show his lighter side. He was paired with singer Renz Verano and chose Rico J. Puno's "Macho Guwapito."

After his performance, the MMDA chairman jokingly reminded the judges, "They have to be a little kind to me. Otherwise, baka paglabas nila, jaywalking kaagad sila." At this, everyone burst into laughter.

"I enjoyed it very much-o," said Freddie Santos in a clear reference to Bayani's song "Macho Guwapito." Direk Freddie gave an uncharacteristically short comment, which prompted Danny Tan to ask the director why he seemed so hesitant to comment. At this, the audience laughed.

Catch another exhilarating episode of Celebrity Duets 2 next week. The mechanics of voting shall be announced prior to the show. Like the previous edition, this singing competition is 100 percent based on text votes.