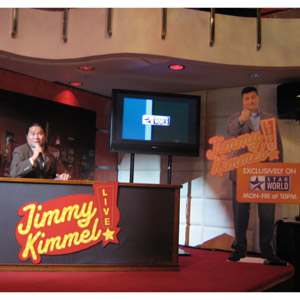 Gabe Mercado (in photo) was tapped to host the Manila launch of cable show Jimmy Kimmel Live. This talk show airs on Star World (Skycable Ch. 48) from Monday to Friday at 10 pm.


Filipinos now have a chance to watch the crazy antics of American host Jimmy Kimmel as his late-night talk show debuts exclusively in Asia on Star World. The irreverent talk show Jimmy Kimmel Live! airs from Monday to Friday at 10 pm on Skycable Ch. 48 (Manila).

First aired in January 2003, Jimmy Kimmel's show used to air live in the United States. However, when some guests used indecent language or behaved badly-such as the time when Snoop Dogg flipped his middle finder on the show-it was decided to have a one-hour delay between the taping and the telecast. Jimmy Kimmel Live! is taped in El Capitan Theatre in Hollywood, California.

During the Manila launch of the cable show, Gabe Mercado hosted the event and facilitated a game inspired by a segment on the show called "Guess What Animal's on Guillermo's Head." A blindfold is placed on Guillermo, who is actually the real-life parking lot security guard of the show Jimmy Kimmel Live, and he is allowed to ask three questions regarding the animal placed on his head.

In a similar fashion, a blindfold was placed over the eyes of a participant and he was allowed to ask three questions about the animal that was placed on his arms. Among the animals that he was able to guess correctly was a crab, a hamster, and a rabbit.

During the press conference of the show held at Spicy Fingers at Greenbelt 2 last week, Gabe Mercado asked Star World executives to explain why they decided to bring Jimmy Kimmel Live! to the Philippines.

According to Star World's vice-president for marketing for Southeast Asia Mimi Yusof, airing this late-night show in the country is a historic move. "We were brainstorming of ways to make our late-night viewership even better. We were brainstorming and we found out that Jimmy Kimmel is very popular in the U.S. and Star World decided to bring this show to the country. We are actually the first broadcaster to bring Jimmy Kimmel outside of the United States."

Gabe Mercado asked the executives of Star World if they thought that this late-night show is too naughty for Filipino viewers? Star World's marketing manager Adel Chik pointed out: "Maybe not because I believe our Filipino viewers are very intelligent so I think we are ready for it."

The female executives also revealed that they have other big shows lined up for Star World. These include seasons of Desperate Housewives, Grey's Anatomy, Heroes, and American Idol.

Jimmy Kimmel Live! often features elaborate stunts, such as having Quentin Tarantino and Lost creator J.J Abrams guest-direct entire episodes. In 2006, Kimmel staged a stunt where it appeared he had been bitten by a rattlesnake. Rushed to the hospital in an ambulance, he then inroduced his guests for the night--the cast of the medical drama Grey's Anatomy.

Jimmy Kimmel is famous for creating a faux fight between him and Hollywood actor Matt Damon. The TV host started closing his shows with the spiel, "Apologies to Matt Damon, we ran out of time," even though Matt was never scheduled to come on the show.


In September 2006, Matt Damon appeared as a guest, but after a lengthy introduction by Jimmy, the actor sat down and Kimmel said they ran out of time. This "infuriated" Matt and he went on to curse the TV host. His performance was so believable that many thought that he was truly upset. The two later confirmed that it was just an act.


On January 2008, Matt exacted his "revenge" by taking part in a music video with Sarah Silverman (Jimmy's then real-life girlfriend) wherein she announced that she had been "f*cking Matt Damon."