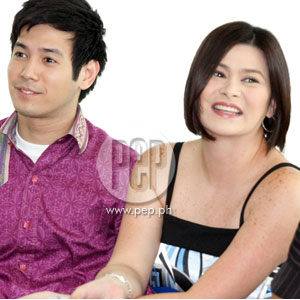 "Masayang-masaya ang mga eksena namin, walang tensyon," say both Aiko Melendez and John Prats, who are the main actors of the weekly mini-series Your Song this September.

Unlike its previous love stories, Your Song presents a more mature story between a couple in its September presentation titled "Someone Like You," which was based on the song "How Did You Know" by Piolo Pascual.

For this month-long episode, "Someone Like You" features the May-December affair relationship to be portrayed by John Prats and Aiko Melendez.

Marge (Aiko) and Melvin (John) meet in a bar. Marge is currrently depressed because of a supposed wedding with husband-to-be Allen (Christian Vasquez) that didn't happen. Because of this, their casual meeting ends up spending the night together—an experience that happens only for a night but will be remembered forever.

Five years later, as much as Marge wants to stay away from Melvin, the two meet each other again this time as co-teachers. As the two spend more time with each other, Melvin's time with his girlfriend Mitch (Krista Ranillo) is lessened.

With the closeness that will be developed throughout the story, fans should watch out if Marge and Melvin their true feelings for each other. Also, will their past relationships get in the way as they reach the so-called happy ending?

Since Aiko is more mature than John, did they have any uncomfortable moments while working on the set?

"Ako, on my part wala namang [ilangan]," answers Aiko. "Not that I'm beside him, pero you know may something na that he will go a long, long way."

John, who worked with Aiko when he was still a child actor in Batang X, feels excited when he knew that he would be working with his childhood crush again.

For this episode, the two main actors say that seniority in showbiz did not matter during their taping.

Aside from the main actors, "Someone Like You" will also have January Isaac and Be Bench finalists Ron Morales and Carlo Guevarra. Watch for the daring scene that John and Aiko did for this month's Your Song every Sunday afternoon, after ASAP '08 on ABS-CBN.
Read Next
Read More Stories About
Aiko Melendez, John Prats, Ron Morales
Post a Comment
Featured
Latest Stories
Trending in Summit Media Network