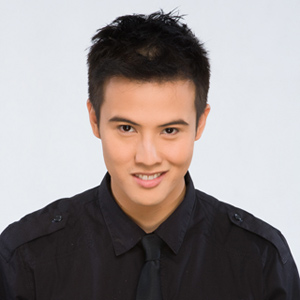 For the 11th gala night of PinoyDreamAcademySeason 2, the public had the chance to choose the Final Six scholars and it turned out that Hansen Nichols will no longer be eligible to win the title of Grand Star Dreamer.

This makes Cebu's Young Heartthrob Van Louelle Pojas as the official sixth scholar who has the chance to follow in the footsteps of Yeng Constantino, the first winner of Pinoy Dream Academy last year. Van garnered 54.58 percent of text votes over Sen's 45.42 percent.

The performances last August 30 were not graded, which made the 11th Gala Night one of the most anti-climatic so far. Still, rest of the top six managed to showcase what learned during their 11-week stay in the academy, which reflected in the comments of the judges.

FAREWELL TO SEN. Dubbed as the Cancer Survivor, Sen of Taguig was diagnosed with thyroid cancer after surviving a car crash. When told that he might not sing again, he almost did not undergo surgery but thankfully, his voice is still intact—allowing him to share it with others.

Clearly the weakest among the remaining scholars (based on average weekly grades), he went out with style, singing a commendable rendition of "His Eye on The Sparrow," a popular Gospel song and arguably his best solo performance throughout the competition. "I think that was one of your most emotional songs which you did. I thought that you were very sincere tonight. And the message was very, very nice, so I enjoyed it," resident juror Louie Ocampo said. Louie ended his critique on a positive note, what could even be a forewarning of his elimination: "What ever happens after tonight, He [God] will be watching over you."

Van's "Who Am I," another worship song, was also well-received. Gust judge Girlie Rodis, a renowned talent manager, said she was impressed with Van since the beginning, and his latest performance was a testament of his improvement. "Alam kong marami kang dinadala sa dibdib mo, so yung performance mo today did not reflect the heaviness of your heart... I have to say maganda ang performance mo today," she said. Girlie was one of guest judges during the first PDA Gala Night. In her critique of Van's first PDA performance, she said: "Kung ako magiging manager mo, mabebenta kita agad... I think you're on your way."

Girlie said Miguel Mendoza lacked the skill to convey the story of his song, "Sandra." Still, she commended Miguel's vocal prowess and urged him to work harder for the upcoming finale. "Magaling ka naman talagang singer, no doubt. You're one of the better singers in this competition. But you really have to work on your storytelling." On the other hand, Girlie gave a more positive feedback to Cris Pastor's "Inseparable." "Ang laki ng iyong improvement, ang ganda ng vocal quality mo ngayon," she said.

Louie said Liezel Garcia's rendition of "Goodbye's (The Saddest Word)" was not consistent. However, he still praised the performance as a whole. "May dating ka," Louie said. "Alagaan mo yun. You have to remember that in the coming weeks if you want be there."

But the resident juror was more encouraging to Bugoy Bogayan ("Can't Stop A River') "No doubt, magaling ka talaga kumanta. Magaling ka talaga kumanta. Ngayon, kailangan talaga you have to find that tone to charm your audience and all your viewers to love you even more," the resident juror said. The Farmer's Son from Camarines Sur has clearly stolen Liezel's thunder, although the Pride of Puerto Galera has garnered the highest average during the 10-week graded performances.

Laarni Losala ("I Am Blessed"), also among the top scorers of the competition, was also not to be left behind. "Blessed ka nga talaga. Buong kanta mo, napakaganda. Meron lang isang parte dun na 'di dumikit masyado nung kumambyo yung key. Pero, like a real star, sumabay ka naman...Pro ka talaga ngayon gabi." Louie also said he thinks Laarni will be in the top three, although it's not clear if he was referring to the top three of the night or of the entire competition.

The official Final Six scholars of Pinoy Dream Academy Season 2 are: Liezel, Bugoy, Laarni, Van, Miguel, and Cris. One of them will become the 2nd Grand Star Dreamer after Yeng Constantino of PDASeason 1. Who will be named the new Grand Star Dreamer on September 14?